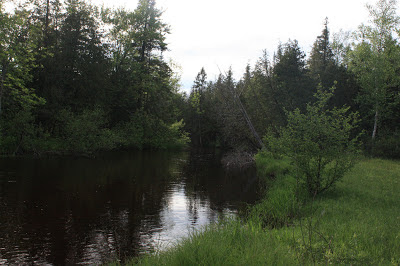 Is it true? It’s June? Shoot, the dry fly season, just begun, is half over, can you believe it? Not if you count tricos of course- they’re too small. I’m hearing reports of drakes already which leads me to. . .

I’m hearing reports of Drakes already. But seriously here’s the report, good for all of Northern Michigan north of M-72. The water is still high but dropping slowly and the rivers are in prime condition. The rains  have finally tapered off a bit and we've entered into some nice spring-like weather. We had a heavy snow pack and a late spring which turned wet, and thus the rivers are all still high. This is excellent news for the rivers and fish, tougher news for the fisherman, who will find wading marginal.  Cold fronts continue to blow through on a regular basis but look for conditions, hatches and the bite to build and improve. Sulfurs, BWO’s, mahoganies, and Iso’s are still the ticket. I’m hearing reports of drakes already, and had some good drake action on Tuesday.

I went mushrooming last weekend which leads me to. . .

The morel mushrooms are nearly done. It has been another tough season, if better than last year by a long shot. I’m nearing the 20 pound mark for my spring take, well off my average, but still enough ‘shrooms to put a smile on my face and make my palate do pirouettes. I cooked some morel chowder  and I must say it was mighty fine. If you’re coming north to pick just know that the blacks are done, the whites have peaked, and only the grays are left. Look for them now if in fact you know where to find them. I’d be willing to bet that the Duck Lake Fire burn area in the UP is producing  a bumper crop right now.

What Else Is Hot

Bluegills are starting to look up. Look for brightly colored emergent weeds and throw white foam spiders, large caddis or brown drakes. The bass bite is HOT, especially for smallmouth. Crayfish and baitfish patterns are de rigueur, but this is the time for top water, so make the most of it. Pike action is tapering off, though I’m hearing rumors of musky, which will be good for a few more weeks. Want a bonafide tip? Fish the sand flats at White Goose Bay on Burt Lake for big walleyes, browns and steelhead. Use an electric motor or a flats boat and push-pole and sneak up on them fish. Send me pics and a thank you. A bottle of Gentleman Jack would do just as well.

Come prepared!! For some reason the ticks are epic this year. Having spent a life in the outdoors I've removed a total of 2 ticks from my clothing until this year. This year I've removed 20 and had to remove two from my skin. Double ICK. Bring DEET spray and use it, try to leave waders and outer layers outside and do a thorough check once a day.

The mosquitoes are nearing biblical proportions this year due to all high water we have had. I sprayed down the other night and had them trying to bite me inside my nostrils! My solution is to wear a raincoat and spray my hat and remaining exposed skin. What's good for mosquitoes is also good for trout, so don't let the bugs discourage you, just be warned and take the necessary steps.
Posted by Fontinalis Rising at 4:58 AM