At times I believe my whole life revolves around water. It's hard for it not to when you live in the Great Lakes State, but my life in particular seems to have been drawn inexorably to that happy medium. I live within sight of a river. I drive past several lakes each day including Lake Michigan and cross several trout streams on my way to and fro. Fly fishing for me simply involves keeping my gear in the car, or deciding that I hate television and the internet, pulling the plug on every electronic device that I own, and running out the door with a fistful of flies and a wind-knotted leader. If I forgot something, the stream is only 5 minutes from home- a very irritating 5 minutes if I have to run back for said forgotten item. The curses of living in Trout Country. God forbid I drove an hour to some other favorite spot, because then I'll have to make it to a local gas station to pick up some flies. Yes, it's that easy. Last fall I was well on my way to fishing the Black River for brook trout when I realized I had forgotten my flies.

Forgetting flies for me is kind of like forgetting to wear pants. I have at least 8 fly boxes, and there is a lot of overlap in their contents. This means that any given fly box, if it just so happens to be in my car, probably has something that will work, and Northern Michigan brook trout are not all that finicky. There are flies at this very moment decorating almost every flat surface (including the floor) of my car, flies that would very much suffice for brook trout. But on this particular September day in question I searched my car thoroughly and discovered that I indeed had no flies in my car that would interest a brook trout. I was tempted to try that musky fly hanging from my visor.


After cursing my lack of a good check list (for crying out loud!), I made my way to Pat and Gary's in Indian River, home of the 99 cent fly. All of you local tyers and purists will curse me, but Sri Lankan kids need to eat too. Lollipops don't buy themselves, and neither does rice. I bought several stimulators and a couple of hoppers. I caught fish too- not a lot, but enough to make me melancholy in the realization that another summer was over, and that these pretty fish would be hidden from me until the next spring.

But I digress. A LOT. I was talking about my relationship with water. You see, I work in construction, a painter by trade. I live near what could be called the Gold Coast of Michigan- an area with a proud tradition of vacation homes that started almost 200 years ago. We have the Lake Michigan coastline and then we have Lake Charlevoix (voted second most beautiful lake in America after Lake Tahoe in USA Today, but who trusts their readers?) and Walloon Lake (bastion of Old Money and Hemingway himself). There's also the lesser known but very beautiful Burt and Mullet Lakes; monster lakes at 18,000 acres apiece, with beautiful homes, warm surface waters, and deep dark secrets. They are not trout lakes, but the browns that swim there will scare you.

I have been working on Walloon Lake as of late. It is a moderately sized lake at 4270 acres, but it is deep. It is a designated trout lake and it is alive with huge smallmouth. The funny part of this is that apart from a few locals no one fishes it. Sure, the cottagers come out and dunk some worms, some may even troll some Cow Bells for rainbows. I've fished it for smelt through the ice. But no one seriously fishes it. It gets a pretty good Hex hatch as well.

The funny thing about Hexagenia is that they are more of a lake mayfly than a river mayfly. They are a cool-, not cold-, water mayfly. They love the big mucky-bottomed lakes we have here in Michigan. The hatches on Lake St. Clair near Detroit are so gravid that they cause traffic fatalities; people literally skittering to their deaths on bugs. The stench is horrific. The bugs that is. Hexagenia only live in trout streams on the margins- in those mucky, grassy banks at the lower ends of the rivers, and the upper end of a brown trouts' heat tolerance. The Au Sable river is a freak of nature being that most of its length can thus be described.

So Walloon Lake gets a pretty good Hex hatch, and the house I'm working on has been covered with flies for three weeks now. It makes for some good pictures. I have always noted some natural diversity between Hex flies- size, color, tail length, but this week I noticed that all of the flies were looking the same- a little slimmer, a little browner, and with tails that were outrageously long, almost 2 1/2 times their body length. When I finally spotted a bona fide Hex next to them I knew I was on to something.

According to Hatches II by Al Caucci there are 18 Hexagenia species, though his book only lists 3 as significant to fly anglers. I wonder what that extra-fat Hex fly was that I witnessed hatching up in the Cascades 5 years ago.

This fly is Hexagenia atracaudata. 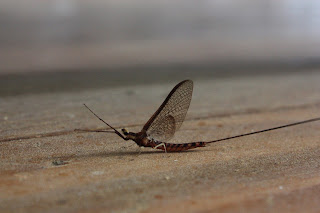 
Posted by Fontinalis Rising at 5:39 PM