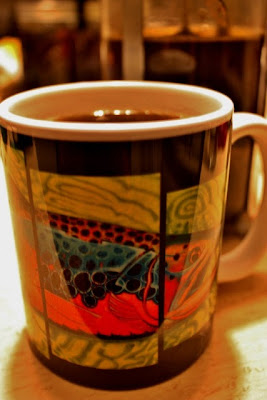 Aaaaauuuuuppppphhhhhhhhffffffttttttt!!! Yaw-AWN stretch scratch repeat- What day is this? Feels like I slept all summer. Monday you say? Must be time for coffee. When was the last time I did MMC anyway?

Sheesh. Oh well. Come on. Sit down. Let me pour you a cup. Is that better? Good.

Well, what can I say? It was a glorious and fiendishly busy summer. I worked overtime, worked on the side, fished every chance I got and in general enjoyed myself.

I also took up running.

Why you ask? I don't know why, other than that I've been looking for a good way to exercise and realized that for the price of a pair of shoes I could go right out my door and have a really vigorous workout in 30 minutes or less. I've run in several 5k and a 10k runs and I'm going to run my first half marathon this fall as my long runs are already over 13 miles.

But you don't care about that.Why? Because this is a fly fishing blog and your number one question, the one thing on your mind is "How about the fishing?"

The fishing is fabulous.


I've always said the fishing in Michigan could hold its own with any other place in the world, but this summer has emphasized that point. It's not just the variety of opportunities, species and water types, it's the sheer numbers of big fish. I fished the Hex hatch a lot this year, especially on the Au Sable. There were multiple big fish feeding on every stretch of river. I landed 6-7 fish in the 18-19" range, but not any over 20"- the ones I'm after. That came last Monday night when I landed a 24" brown while mousing. Yes, September is a great time for mousing.


Likewise with the flats fishing. Big fish everywhere, though the bite was exceptionally tough this year. Bad timing on my part. I still managed some decent bass and one pig of a carp that was 22-24 pounds. But that's pretty much over with now.


September is one of the best months for fishing here period, the fall equivalent of May. The browns and brook trout are feeding heavily to bulk up before spawning in November, and the streamer bite has begun, while mousing at night and terrestrial bugs are still hot.

The salmon runs are in full swing and reports are that the runs are heavy and the fish are huge. I caught my first king last night, an 18 pound brute that smashed my fly then took off up river and disappeared around the bend. He ran more than 200 feet upstream and when I caught up with him there he turned and ran at least 700 feet downstream through two holes and two sets of rapids. I fell twice and bruised both my knees on the rocks. It was perhaps my toughest salmon fight ever. You don't fish for salmon because they're beautiful or require finesse; you fish for salmon because it's a brawl, a knock-down, drag-out fight, and a real test of your gear and fish handling skills. One bad knot, one misplaced step or one mistake with your line and it's over. Salmon fishing is an athletic activity rather than a relaxing pastime.


Personally I don't care for salmon all that much. I'd rather catch browns or brook trout. My personal goals for the fall are to target some bass and pike on poppers, then get in on the streamer action. I would also like to swing some streamers for kings and cohos later in the month. I'm buried in work right now so we'll see what I can squeeze in.

I have a rod review in the works and just got back from a fantastic kayaking trip at Pictured Rocks National Lakeshore near Munising which I'll have to share. I have a few other tricks up my sleeve so stay tuned. For now the coffee is gone and it's time to get to work.


Let's get after it.
Posted by Fontinalis Rising at 3:24 AM