Pike in the Old World

There have been several videos over the last 5 years that have gotten me thinking more and more about pike and musky fishing. An Esox take is one of the most dramatic in the fly world. You have to bear with this video a little but you'll see what I mean. This one got me amped.

I believe this guy is from Denmark. I'm a little disappointed that European pike on average are bigger than North American pike, but I'm biased. They have some great fishing there. This video is so infectious that I'll let it do the rest of my talking.

JT/FR
Posted by Fontinalis Rising at 4:51 PM No comments: 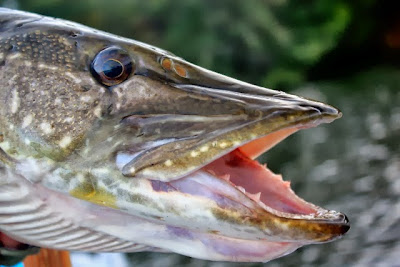 I have always been fascinated by Northern Pike. I'm not sure if I was supposed to capitalize that, but pike are the kind of fish, that if you met them at a party you would call them sir. Pike are a type of piscatorial aristocracy with only two tracks running through their brains-

When I was a child a family friend told me he could guarantee me a pike. I was used to fishing for bluegill and trout and perch. I was utterly floored by the thought of a fish that had a mininimum size limit of twenty inches. Never mind that a twenty inch pike is a fairly scrawny and sorry fish, the very idea that you can't even keep one until it is that big was astonishing to my young mind.

And so we set out one evening on a small local flooding. It was a pleasant midsummer eve with a dying breeze that finally gasped its last leaving the water's surface polished and smooth as a molten mirror. And this was the key factor in my friend's guarantee- when the sun and wind drop and all is still the pike hunt one last time before the night forces them to go dormant, and this still molten surface is what betrays them.  Before long we saw an enormous boil on the burning surface. We paddled that direction and I cast to the dissipating rings. John Sherman was true to his word and I caught a 24 inch pike, the biggest fish of my young life.


Fast forward through many years. Fast forward through the rest of my adolescence, Drivers Ed, Salutatorian, NYC, marriage, the birth of India, Detroit, Ohio (I still smell of sulfur), G&L Bagwell, Detroit again and then back up North. North- my home where many of the lakes are indistinguishable from the ones you see in the Canada brochures, all of which are teeming with pike. I have spent many evenings throwing spoons and spinners for pike for the sheer rod-jarring hell that is pike fishing. I do it for the romance of these lakes, the cry of the loons and my curses echoing off of the cedars. I get hurt every time I target pike- bit, hooked, cut by line. My standard first-aid kit serves me well, consisting of hockey tape and ibuprofen. If you can't fix it with those two items you need to be Medevac'd. 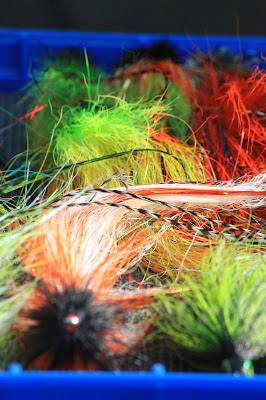 I started fly fishing as soon as I could after I moved back North. Five years ago I sold all my other gear or gave it away, and except for a couple rods for perch I fly fish exclusively now. It is a choice. Fly fishing is so trout-centric that it has left a hole in my Northern identity until now, a hole I plan to remedy. I am going to fly fish for pike. I'm not paving any new ground, just getting back to my roots without going back to gear.


So plan on seeing some posts here about pike and musky. Flies, gear, fishing, trips, pics. Several posts are in the works. One expedition is in the bag and several more are planned.

I am afraid. Very afraid.


Posted by Fontinalis Rising at 6:12 PM No comments:

Conservation, or What I Want

One of my readers recently volunteered me to stand up for wild steelhead.

This would seem to be a nice reader-friendly stance, but frankly I fail to identify with this cause. It's not that I don't think wild steelhead are disposable, it's just that it's so distant from me that it lacks resonance. Steelhead are an introduced invasive species here in the Great Lakes. Should I really be advocating for them?

If I lived in Maryland and flew to British Columbia or the Olympic Peninsula each year to pursue wild steelhead I guess I could be on board. But I don't live there or fish in those places. I live in Northern Michigan. We have lots of wild steelhead. And lots of problems. Non-native steelhead are not one of those problems. Here's what I would like to see done/restored.

1. Restore Coaster brook trout. They were the salmonid of our shores. Imagine travelling to Lake Superior to catch 40, 50, 80 or more 3-10 lb. brook trout in a single day. They were also present in northern lakes Michigan and Huron (and still are). This is our quintessential native trout (char), and it's high time we brought them back.

2. Restore the Lake Trout. After decades of Federal stocking after their decimation by lampreys and smelt their number have been restored- or have they? Turns out we were stocking federal mutts. Meanwhile a legacy stock of deepwater spawning native Lakers has been discovered in Elk Lake. I say a silent prayer each day that these fish get restored.

3. Figure out what to hell and gone is up with the perch. You used to be able to get a perch basket with fries in a local eatery for about $6.99. Now it will cost you 3 times that. Perch populations in the Great Lakes crashed 15 years ago give or take, and you have better odds of eating cod here than perch. Even though cod are highly endangered.

4. Get sturgeon off the Endangered Species list. Cripes. We have enough water already. Let's get back to the days when we can stack them on the beach and burn them.

5. Keep Asian Carp outta here. This is such a no-brainer it needs no further explanation. It won't be the Fish Apocalypse that everyone claims, just another headache we don't need here.

7. Protect and promote musky and pike fisheries. They are a statewide resource that is all too often ignored.

8. Restore the Arctic Grayling. They were our calling cards. Until we wiped them out via logging. The land still weeps.

9. ERADICATE ALL SALMON, STEELHEAD, BROWN TROUT, SMELT, SEA LAMPREYS, CARP, ZEBRA MUSSELS, QUAGGA MUSSELS, CARP and other foreign invaders that have monopolized our beautiful home waters. I would love to see this watershed truly restored and not made into a sportsman's paradise. We've done a bang-up job so far. It's time we claimed our birthright.

Posted by Fontinalis Rising at 7:53 PM No comments: