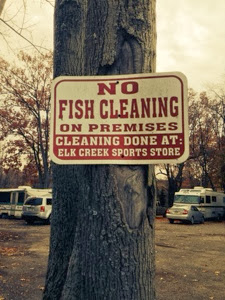 It was the 2013 Rustbelt Drake Bake (invitation only). Being that it was held at Elk Creek Campground we opted to fish right there on Saturday. 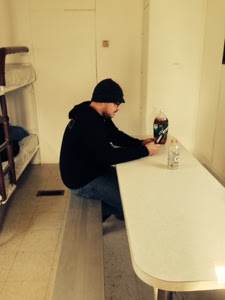 Alex live blogging from the shack
I awoke to a less than perfect world Saturday, but after a couple cups of strong coffee and a peanut butter, jelly and smoked provolone sandwich I wadered up and took a peek over the bank. Two guys were hooked up on fish. I wandered down to the access and a herd of anglers stood at The Wall elbow to elbow like soldiers in their jack-booted waders fishing in lock-step. The guy on the end was fighting a good steelhead. The running joke is that the proper way to release a fish is to kick it out onto the bank, stand on it to remove your hook, then kick it in the head back into the river. 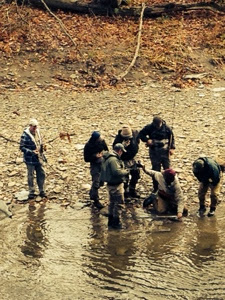 The Spey gang at work
This is industrial fishing at its finest. The Lake Erie states crank out millions of steelhead smolts which are not so much fish as say hot dogs or Twinkies, mass produced, quality controlled, pre-packaged and then sold at a profit. "Come to Steelhead Alley and catch a steelhead" say the brochures. The average working stiff here is going to be pissed off if he drives an hour and a half from Pittsburgh or wherever the hell be came from if he doesn't catch a fish. He paid for it after all. 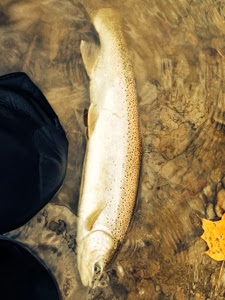 My girl
It was tough to find a spot in the herd to wedge myself into so I decided to do what I do at home when the going gets tough and pick the river apart, finding the micro spots that just might hold a fish.   I found a small run with a deeper seam and no one fishing it. I set up at the top intending to work through it but some old dude came and parked right at the prime spot below me in the center of the run where the water starts to slow. Then some other guy flanked me on the right. I did the only thing I could think of and low-holed Old Dude. I was probably the jerk here. It was probably Old Dude's name carved into the tree on the bank. 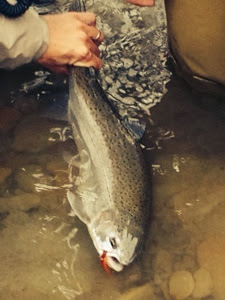 One of Nick's fish
I wandered back up past The Wall (two people hooked up), past the next prime lie (likewise two people hooked up) and fished the crud above that. Our crew included a large contingent of gang-banger Spey casters who managed to wedge themselves into the prime run below the tubes. It was a combat fishing maneuver, artfully done, beautiful in execution, until they had carved out enough real estate to accommodate a half dozen Spey casters and they just kept rotating through. 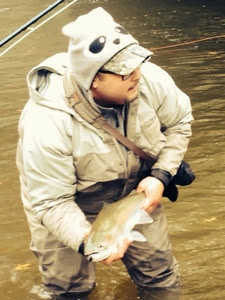 Mike the cook with a good fish
It was mesmerizing to watch these guys punch out cast after effortless cast. Guys like Rick Harrington or Nick Pionessa make it look easy but I'm not fooled. I had wanted to put on my Skagit head and cast a little, but I'd rather thrash around in private. This is foolish vanity on my part as I probably could have gotten a free lesson out of Rick. 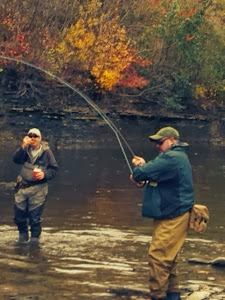 Gang-banger hooked up
About halfway through the afternoon I was fishing the No Man's Water in between the Spey gang and Bait Platoon Bravo when my indicator dipped under and I was into a four pound hen. I landed her quietly, removed the hook without taking her out of the water, snapped two photos and let her swim away. I hooked up three more times including a much larger fish that rooster tailed my line before coming unpinned. 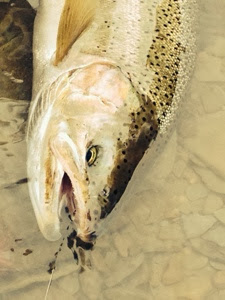 Another good buck
The Spey guys seemed to hook up a couple of times an hour and every fish was greeted by a gang of guys with cameras snapping. They were a good bunch, and I've never fished with so many truly good anglers at the same time. It was like attending a beat poetry jam in which everyone got a turn at the mic, each had his own style, each giving a fascinating performance.

I was in my bunk sleeping before 9 and slept like a stone. I awoke at first light to a howling gale and went to the cook shack in search of coffee. Alex rolled out shortly after and we went to look at the river. If anything there was already more guys jostling in the river than yesterday. I'm not complaining, it's not any different than what you'd see at Tippy on any given weekend. But there's a reason I don't fish Tippy. Alex and I looked at each other and got into the car. We're driving home now and we're not disappointed. We have achieved our goal.
5 days, 5 rivers, 5 Great Lakes. 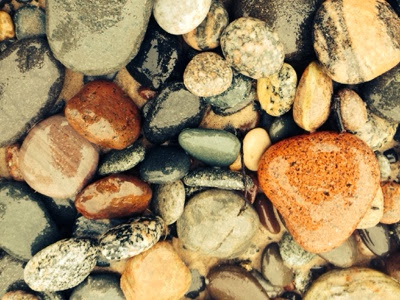 Posted by Fontinalis Rising at 7:01 AM