So 2013 is over. I don't want to do one of those year end posts and I don't do New Year's resolutions.

But I am starting to mull over some things for the coming year, so I'm just going to do a brief wrap-up and look forward. Here goes.

If you haven't already noticed I have what I call a Jealousy Counter on the right hand side of this blog. It's the number of days I've spent fishing during the year, often while you were stuck in rush hour traffic in Detroit or Chicago or Denver or wherever you hail from. According to it I fished 87 days last year. I was well on track to hit 100 days, but then I decided to write a novel in November, then the weather decided to turn bitterly cold and snowy. So 87 days it was. 87 glorious days. Turn the page; the Counter is reset.

If I had a highlight reel from last year? I had a lot of good trips but any trip that involved Alex Cerveniak, Chris Reister, Tom Hazelton or Zach Ginop was a great trip, with apologies to everyone else I fished with last year. All of you were great and I'm really thankful to the long list of good people I shared the water with last year. To Brian Kozminski, Tom Menas, Richard Swan, Ethan Winchester, Dave and Jeff Karczynski, Josh Greenberg, Brett Watson, Cameron Mortenson, Christian Horgren, Jon Odykirk, Matt Erny, the Drake Rustbelt Spey Gang and anyone else I may be forgetting- thanks for sharing the water with me. Let's fish again soon.


The Hex hatch was awesome. I'll be taking several days off in June for it this year.


I didn't mouse enough in '13. That is going to seriously change.

I didn't flats fish enough, but the times I did were epic. 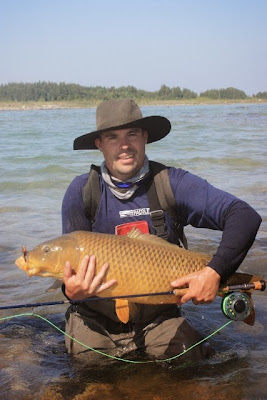 Mike Sepelak came to visit in August. He stayed 2 nights and fished 2 days before family business called him away. Mike my friend, come back any time. I promise I'll take you on some sure-bet fishing next time. I promise.


5 Days, 5 Rivers, 5 Great Lakes. My trip in early November with Alex Cerveniak was briefly epic. Five days isn't long, and we barely scratched the surface of the waters we fished. But it was a great trip, one I will never forget, except for the parts I can't remember.

To Tom Hazelton- our trips (tap on the nose) were epic, but since I don't dare talk about them this is as far as it gets. Let's do some more.

Get the tools out of the guest room and "move in" to my place. I moved here over two years ago, but there were rumors it was going to be sold again and so I never finished unpacking. Several friends had to sleep in less than desirable conditions. Everyone makes the "bachelor" excuse for me, but it's getting a little tired now. Tom, Brandon, Mike- next time you come to fish the guest room will be a bedroom and not tool storage. I may even put a blind up on the window.

Always have a mouse on hand. I night fished fly hatches a lot, several of which didn't happen. Tying on a mouse sealed the deal, even a couple of times when the bugs did pop but wouldn't touch my fly.

Fish more. I waste so much time and opportunities. I get into a rut like we all do. There is so much of this state I have never fished, so much of my home waters I have never seen, and too many opportunities wasted. I should be able to fish five days a week here no problem. I should be able to do that all year and never fish the same water/fish/hatch twice. There are a number of BIG fish opportunities that I don't capitalize on because. . . (insert excuse here).

Land those big fish. I'm tired of "the one that got away" stories. I hooked up on perhaps my biggest brown ever during the Hex hatch last year. It too me into my backing before breaking me off. I hooked up on several big brook trout this year. I didn't land any of the double digit steelhead I hooked up on. There's always an excuse as to why we don't land fish, and yet I see dozens of big fish on magazine covers and in social media. It's time to start paying attention to detail and get the job done on a regular basis.

I took up running as of last July and have done fairly well at it, far better than I had imagined. I don't really get warmed up now until I've run at least 3 miles, and 6-10 is pretty easy. I've done two 13 mile runs, and so I've signed up to run my first half marathon Memorial Day weekend. I plan to run one every month after that, hopefully culminating in a full marathon in the fall. What does this have to do with fishing? Nothing, but it has made me a much happier and fulfilled person. There is something about the freedom of running that reminds me of childhood.

I started a Fontinalis Rising book last winter but it is only half finished. Then the week before November I saw an ad about National Novel Writing Month and resolved to write a novel in that month, which I did. My goal is to get both books into print this year. The Fontinalis Rising book will be a collection of my best and most popular posts, but will also contain lots of new material, stuff I had intended for the blog but never published. Call it a 50/50 mix.

Alex Cerveniak says we're fishing 200 days this year. I say why not? It will take a darn good reason for me not to stop off somewhere for at least an hour. I live Up North for crying out loud. I cross five trout streams EVERY DAY on my way to work, and pass several lakes that brim with every species the Great Lakes have to offer. No more excuses, no more wasted fishing opportunities, no more wasted life.

It's time to stop pretending to be a fly tyer. I need to fill my boxes with my tried and true basics, but I also need to sit at the feet of the Masters and dial it in. As much as I love fly shops it's time to stop buying flies.

Monday Morning Coffee. Hot and on time.  Good original content. I'll answer every comment. And by the way, please comment. It means more if you comment here on this blog than if you comment on Facebook or another social media post. If you had the feeling that FR was going away, think again. One thing I will say is that I enjoyed blogging a lot this year because I started doing it my way. I know my way isn't the best way, but blogging is a labor of love. Feel the love. And keep checking back on FR.
Posted by Fontinalis Rising at 9:15 AM