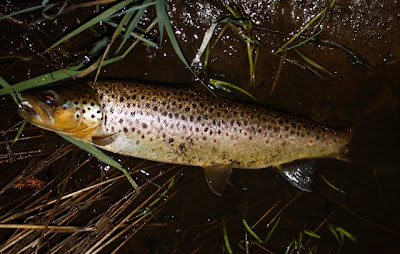 In the spring when the weather and water warms, the frogs emerge from the mud and the mice from their burrows. As the water temps reach into the 60's and the days get longer, usually about mid-May, the bank side grass and water weeds sprout and grow. This encourages the activity of the mice and frogs. Their activity encourages the brown trout to target them.

I heard one guide say that we should probably call this "frogging". It's true that brown trout will eat frogs but it is well known that they target mice. Whether they prefer one over the other is up for debate, but brown trout are opportunists and likely target any critter that swims across the river. The thought process is likely more akin to "fits in my mouth/doesn't fit in my mouth".

Both mice and frogs regularly swim across the rivers at night. I have observed this frequently. Frogs tend to swim with a kick and glide action with their nose pointed directly at the far bank. Mice tend to quarter across rivers with their nose pointed upstream and their legs kicking furiously. Current speed directly affects the swimming position of both. The swifter the current the more they tend to swim nose-in to the current. Regardless, both critters create a similar telltale wake across the surface.

The next element you need to know is the attitude of your quarry. Big browns are comfortable at night. They can see quite well on even the blackest of nights but seem to know that you can't. They come out of their hiding places and roam at will. Noises don't scare them. I have hooked up regularly in six inches of water.

What this means is that you are not necessarily fishing log jams and cut banks. You'll want to target feeding lanes in every setting on the river. The center of a hole where the current dumps in is one prime spot, but so is the tail out where it starts to get shallow. The best spots I've ever found are what I call "throats". They are places in a run or where a tail out dumps into a run in which the current gets funneled into the center of the river and the water is 2-3 feet deep. I've caught all my biggest fish in these spots. The strike is usually instant. The important thing is to work the whole river and not just areas you think of as big fish spots by day.

One night I was out with two friends trying to put a third buddy on fish. We were giving him all the prime spots and so I just started hitting the less ideal water above and below our friend. He did manage to land a fat 19 inch fish, but I hooked up on a fish that was closer to 30 inches that jumped several times before taking me to the wood. I got my fly back so I know he swam free. Any angler given a choice would not have fished where I was. There's no predicting with certainty where those fish will be.

Another factor to consider is moon phase and what the fish is seeing. Our perspective is of standing above looking down into dark water. For the brown trout the perspective is completely opposite. They are in the dark looking up at the surface which is back-lit by the moon and stars. 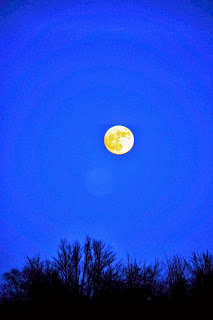 Imagine yourself in your house with all the lights off looking out your windows. People can't see in, but you can see out, even if it's dark out. Imagine yourself looking out your windows when it is daylight versus when it is dark. Look at any unlit house during the day and it is hard to see in. If you are inside the house everything outside is easy to see. At night It is even harder to see into the house, but you can still look outside and make out some details.

Brown trout are at their boldest on completely dark nights, and experienced anglers concentrate their efforts around the dark of the moon. During various lit phases of the moon the fishing can be quite good after dark before the moon rises. A steady bite often fades away as the moonlight hits the water. Conversely, heavy cloud cover during the full moon can make for excellent fishing.

Moon phase often affects color selection as well, and is counter-intuitive. Black flies offer the most contrast on dark nights, making your fly easier to target. White flies on moonlit nights offer the least contrast making them harder for browns to see and possibly spot as a fake. Whatever you do, make sure you switch flies and colors often to find out for sure what they want on any given night. There are no hard and fast rules, but they often do show a distinct preference at times for white versus black.

Cloud cover and the time that the moon rises or sets can make a dramatic difference in the fishing. I have had a steady bite suddenly end when the moon rises at midnight. I've seen a slow bite during the full moon pick up when clouds cover made it dark again. I had one full moon night in which I rolled several fish in every spot. Don't stay home because the moon is out, but just know that darker conditions are more conducive to mousing.

No matter what, after dark big browns come out of their daytime hiding spots and roam the river at will in search of food. Perhaps the most important element  of mousing is the tell-tale wake of your fly across the surface of the water. I'd bet I could impale a sock on a big hook and wake it across the surface and get fish to strike. There are a lot of aspects about flies that I will get into, but the central theme will always be that they make a wake across the surface.

To boil all this down to a few bullet points:

In my next installment I'll go over the gear and rigging you'll need to be comfortable and successful at night.

Posted by Fontinalis Rising at 7:16 PM