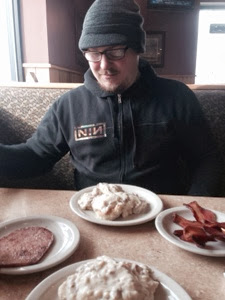 There must be a starting point.

"I thought of inviting someone else to come, but then I decided there is no one else I'd rather share the first float with than you."

This is a rather heady compliment coming from Alex Cerveniak, proud and heretofore frustrated owner of a new used drift boat. We're sitting in a diner, eating biscuits and gravy, ham and bacon, fueling up for an afternoon on the Holy Waters of the Au Sable. It will be our maiden voyage in this boat, a baptism of sorts, the kind of thing that holy water is for. This is the warmest day we have seen in over fifty, and yet the temperature still hovers irritatingly below freezing.

We linger over our plates, our breakfast presided over by the head of a dead elk hanging above the mantel, before heading out to Gate's Au Sable Lodge and Fly Shop, to do the obligatory Parting-With-the-Dough. Fly fishing has it's rituals, and you don't dare dispense with the spending money part.

We drove out from there under a yellowing sky, the air still cold, but at this point nothing could dissuade us. Alex picked up his boat over a month ago and the bitter winter has stymied all efforts to get it on the water. He has spent evenings in his garage in his PJ's, drinking beer and imagining what it might be like to actually row the damn thing. There are times to concede defeat, and times like this when it is necessary to forge ahead. We got some intel (well worth the $22 spent on stuff I don't need) from the guide behind the counter and went from there.

I would like to tell you this was a wildly successful fishing trip. It was. For one thing the country store where I first met Alex had a sale on Combos and so I had snacks for the entire day. That Buffalo blue cheese flavor is killer. For another, we were actually on the water, instead of sitting at home wishing we were. Oh, and we both saw a fish, though not the same one.

Alex rowed and fiddled with his inadequate anchor. He's working on it. I did some casting and gave expert advice from the front stanchion ("slide into that spot right there past the downed cedar right next to the shelf ice"). He let me row for a little while, but he has a strong captain streak in him. This is a good thing in my opinion, as it guarantees I will get a lot of time up front. Alex put on his usual casting clinic. He lifted casts I would have been happy with and then would proceed to actually hit the log he was casting too. These casts should have triggered violent irritation strikes judging by they way they were irritating me, but it could be that brown trout do not share my jealousy of good casting.

I spent half the float dissatisfied with the water, however Holy it may be. Holy? Sure. Infallible? Never. This is my cover for my lack of knowledge, technique and skill. The water was too shallow, lacked cover, was too wide open, in my considered opinion. But rivers have a way of discerning this and responding, and soon we were into beautiful bends with deep water and jaunty crossover riffles, the kind that hold rainbows and brook trout, with surly, heavy shouldered browns lurking in the bends like bouncers at a club.

Stripped of my excuses, I kept casting and lost a lot of flies, all of which I had tied myself. This did not in any way remove the sting of their loss. Never mind that most of them looked like belly button lint. Yes I regularly find gold wire in my belly button.

There are so many things that can add up to a perfect trip. Before starting this blog I used to always fish alone. Fly fishing was my escape from human kind and their machinations, save their dastardly fly reels. This was a perfect trip. Two friends, an untried drift boat, two sketchy launches and a Hydroflask full of alcohol of indeterminate lineage. No fish were necessary.

I tied double bowline knots, one on each end of a hundred foot nylon rope Alex brought to drag the boat up the un-plowed part of the launch. They both failed, drawing up tight to the hitch points. I didn't think this was possible with a bowline knot, so if any of you have some insight into this I appreciate it. 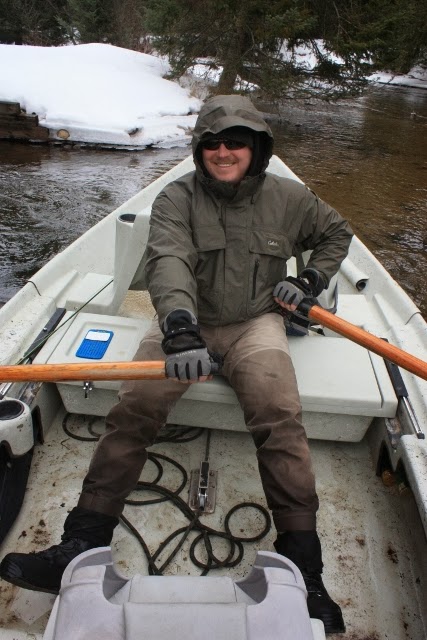 Posted by Fontinalis Rising at 6:01 PM