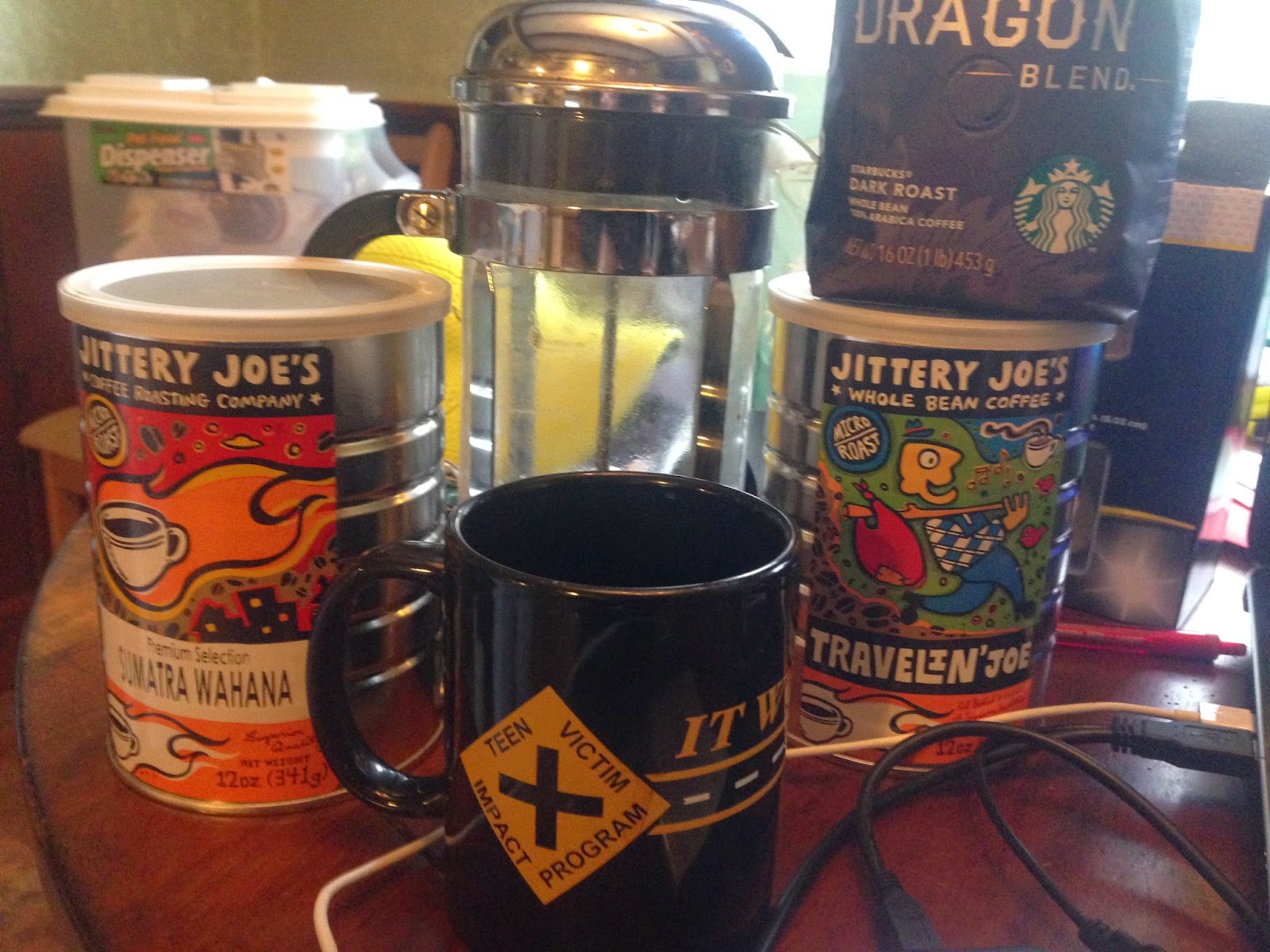 Yyuuuurrrrpppphhhhttt!! Yawn, stretch, scratch, repeat- It's Monday morning yet again, so let's have some coffee.

Or let me say "let's have some GOOD coffee". I did get out fishing last week but it wasn't much to tell about. I happen to know that a good number of you out there are either enduring, anticipating, or digging out from a sizable storm. If you're further north it is so cold that the mere thought of going outside is enough to induce sympathetic frostbite, so let's think warm thoughts, namely coffee.

I've been drinking coffee since I was eight years old. This explains why I am so tall. When I was nineteen I moved to Brooklyn, New York for a few years. Call it my Great Escape from rural life. I got out, went to an entirely foreign place and got a taste of the world at large.

Down the street from where I lived was a tiny place called Cranberries Deli. It was on Cranberry St. Cranberries had the richest, darkest, chewiest coffee I had ever tasted. It was almost a meal by itself, and it opened my eyes to the real possibilities of coffee.

It was a few years after that that Starbucks came onto the national scene. All the talk was about Seattle style coffee. For better or worse Starbucks changed the way we think about coffee, and for many of us changed the way we drink it. I was drinking espresso, lattes and cappucino in Little Italy before most of the people I knew had ever heard of it. Starbucks brought all that into the popular lexicon. Starbucks was lauded as an American success story.

Nowadays the pendulum has swung. Judging by all the hip people with laptops I still see hanging out with frothy hot drinks at Starbucks, I'd say the chain is still fairly popular, but a new generation of Starbucks Haters has emerged. I capitalized that because they seem to make it their profession. "Char-Buck's" they call it. "There's better coffee than Starbucks" they glibly say.

As a matter of fact I had some random young woman rip into me last week for saying on social media that Starbucks is good coffee. Something to the effect that I've never left North America and may as well drink camel piss as drink Starbucks. I politely suggested she would know. I can also say that I have drank excellent local coffee throughout America, the Caribbean and Europe. I've had bad coffee everywhere I've gone, and I've had coffee that sent me to another world.

My bone of contention with the Haters is that 90% of Americans out there would not know what good coffee is without Starbucks. Outside of major cities like New York, Seattle, or San Francisco, there were no local roasters, no coffee shops as we know them now. There was no coffee culture. A coffee shop was where you drank bland Bunn-O-Matic with your cinnamon roll. Odds were that the cinnamon roll was handmade in-house and very good, and that the coffee was bland, pale, weak, and roasted in a giant far-off factory.

Starbucks changed all that. Their coffee had flavor. It was dense, had bite. It challenged people. All of a sudden they were willing to pay $4 dollars for a coffee drink. It didn't take long and other chains came along, but more importantly, small mom-and-pop or boutique roasters and coffee shops sprung up all over the place, not just in cities, but in small towns too. Now you can get locally roasted coffee in most counties of the United States, if not most small cities and large towns.

"There's better coffee than Starbucks" they say, and they are right. But Starbucks offers a consistent product. You know what you're getting, and it's not bad coffee.

I'm going on about this out of frustration. I try to support local roasters all I can, but frankly some aren't worthy of support. They got no game.

I spent a good part of yesterday driving around Athens Georgia sampling the local offerings and so far I'm not impressed. I spent $45 dollars on coffee beans, and the only one worth drinking was the Starbuck's Komodo Dragon blend I bought for back-up. I even tried to enlist the help of the baristas, who were almost clueless. It's a college town, so what can I expect?

Now, I have very specific tastes in coffee. I love espresso and espresso drinks including lattes and cappuccino, no flavors please. Every morning for the last twelve years I have drank a pot of french press. French press requires richer, darker roasts, but it yields a superior cup of coffee at still a reasonable price and amount of effort. To be fair, the Other coffees which I was sold probably would make a decent cup of drip coffee, if that's your cup of tea. It's not mine, and they made horrible french press.

I'm very blessed in that my local roaster in Petoskey Michigan, Roast&Toast, roasts excellent coffee. Yes it is far better than Starbucks. The freshness of the coffee comes through, but it is also a tribute to the roaster- whoever is doing the cooking knows their stuff. Their coffees are rich, complex and satisfying every time. Even when I make a mistake and choose the wrong beans for french press it's still pretty good.

I've had several transformative coffee experiences- my first coffee fixed for me by my grandmother with lots of sugar and cream, my first Cranberries coffee. There was a small cafe in mid-town Manhattan where I first had Sumatra Mandelhing. It was so good it brought tears to my eyes, but I never found that cafe again no matter how hard I searched. There was this place in Dearborn Michigan called the Mad Hatter that served some Mexican variety, again so good I nearly O.D.'d. I've had too many good European and Levantine coffees to relate here just now (and no, not all coffee in Europe is good).

The best coffee I've ever had was roasted by my friend RC Gartrell in Telluride Colorado. RC was a bit of a Renaissance man- a punk rocker, father, husband and good friend, but he was a coffee roaster par excellence. All of his coffees were to die for, but there was one from South America he roasted that was supreme. Anyhow, I've lost track of RC. Last I knew he was lured away from Telluride by a growing national brand. I'm sure he's still roasting great coffee.

This post wasn't meant as a plug for Starbucks, but only my observation that the Haters have the convenience of living in the Babylon that Starbucks built. It's easy to hate the Emperor, while loving the Empire.

I'm also laying down the gauntlet for you Athens Georgia- with your plethora of coffee shops and roasters, where is your game? What have you got besides catchy names and pretty packaging? Bring it if you got it. And by the way, your selling me 12 ounces of coffee for more than I pay for a pound of better coffee at home is none too charming either. Knock it off. If you're turning product over fast enough you can sell it in bags like everyone else and skip the fancy cans.


Well with a week of nasty weather ahead I don't know that I'll get out fishing but I hope you do. I'll be in Asheville NC Wednesday for the Orvis Down the Hatch Fishing Festival at Highland Brewing Company. Other than that I'll be tying flies and writing.

My coffee has been long done, and I expect yours is as well. Let's get after it.
Posted by Fontinalis Rising at 11:40 AM