I pulled into the parking lot, turned off the engine and got out. Wandering over to the bridge, I spied an older gentleman just upstream, mending casts against the bank under a tall tree.

"I just lost a big brown right here" he said. I wished him luck and went back to car to get ready.

My parking in the lot was a little misdirection on my part- just up the road was a metal gate with a trail that wandered over a mile upstream, and away from the main access, away from the crowds I hoped. Much to my dismay, when I locked my car and turned  to take off I could see that someone else had parked at the gate and was now headed down the trail in front of me.

When I reached the river I didn't see the mystery angler anywhere. In my experience most anglers, as many as 70 percent, fish downstream. On the other hand, I almost always fish upstream, and so I made my way up, hoping to have the water to myself. Alas, it was not to be. I hadn't gone too far before I saw him working his way upstream, no doubt seeking some solitude. I turned and made my way back down, and unfortunately into throngs of other fly anglers.

The question is- which is better? Fishing upstream or downstream? Or can an argument be made for each? Let's discuss the merits and reasons to fish both.

For years as a wading angler I fished exclusively upstream. My reason for doing so was simple- fish face upstream into the current and thus face away from me the angler. If the fish can't see you coming they are less likely to spook, and you are better able to sneak up on them.

While in theory this works, in practice it can be much more tricky. What I've found over the years is this- if you get into position without making a lot of noise or waves then it works. The fish won't know you are there and you can cast to calm unsuspecting fish.

If you mess this up in any way, you've blown it. Trout are very sensitive to disturbances from behind. This seems to be especially true of their blind spots. If there is a disturbance in the water- a splashing angler, or waves made by clumsy wading, or the sound of fly line being ripped off the water, the fish will spook out and not feed again. Otters and birds of prey both try to sneak up behind fish, and trout will react instantly to any percieved threat from behind.

Fishing upstream can be extremely difficult if the current is swift or deep. This is why many anglers choose to fish downstream. If the river is surrounded by private land fishing upstream may well be impossible.

When To Fish Upstream

Any time you can. Despite the disadvantages I still believe fishing upstream is always the optimal approach. Provided you have a stealthy approach, the fish won't see you coming and you can present to them undisturbed.

When fishing small streams. Many of my local streams are far too small to consider fishing downstream. Some flow through silt-laden tag alder swamps, and wading downstream simply kicks up a cloud of dirty water that not only notifies the fish of your approach, but also clouds up the water to where fishing is pointless. Even the gravel streams are far too narrow, putting you on top of the fish before you could cast to them. An upstream approach is the only option on these streams. 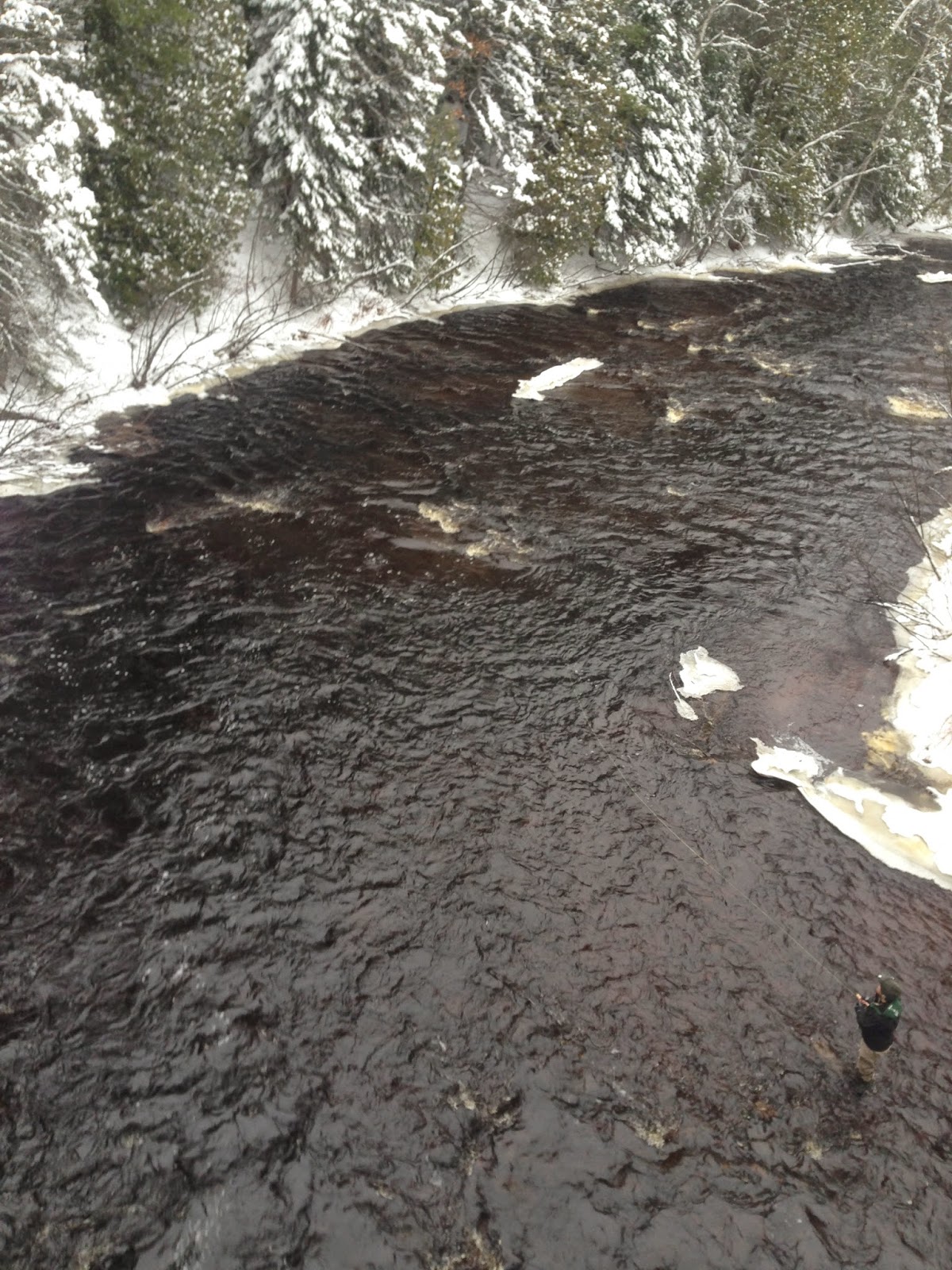 Fishing downstream goes against my grain as an angler, but there are some solid reasons and times to fish downstream.

The first is that the stealth issue isn't what you might think. For some reason fish will often continue to feed even though you are in plain sight coming downstream. While they will spook at the slightest provocation from downstream, they will often continue to stay on their lies and even feed until an upstream threat is imminently upon them. This seems to be especially true of drift boats. I have caught numerous fish that hit within a few feet of the bow even as I am bearing down on them. For some reason drift boats don't seem to spook them at all on occasions.

The second reason is when access or current speed dictate a downstream presentation. Sometimes the water you want to fish is simply downstream from the access. If the land is private but the water accessible this will be your only choice. Some rivers are too fast to fish upstream, and it's simply easier to walk down provided you have another access and/or trail leading back to your car.

A very good reason to fish downstream is so that your fly line doesn't spook fish. When casting from behind it is often necessary to land your fly line right over the fish in order to get the drift. In extremely clear water or sunny conditions this can spook the fish. On a lot of the small streams I fish it is simply impossible to get off to one side or other in order to avoid casting over fish.

In casting downstream your entire line will hit the water well upstream of the fish, allowing your fly to be the very first thing the fish sees. If you are casting to a lie quartering across the stream, it's possible to put several drifts over a fish without it ever seeing your fly line.

When to Fish Downstream

When fishing from a drift boat. It goes almost without saying that it is necessary to fish downstream from a boat. They don't call it a drift boat for nothing. Take advantage of the cone shaped area ahead of the drift boat and present to fish that haven't been spooked by the boat yet.

When fishing streamers or soft-hackles. Streamers, skunks, girdle bugs, woolly buggers, and soft hackles all benefit from a quartering downstream presentation. If the season, time of day, or current hatch cycle dictates these types of flies then fishing downstream is a must.

When sharing the water with another angler. That's right- I don't combat fish, and neither should you. If you find someone working the water above you and think you have a fair shot of solitude downstream, then dig out one of the patterns mentioned above and turn downstream.

Posted by Fontinalis Rising at 3:52 PM