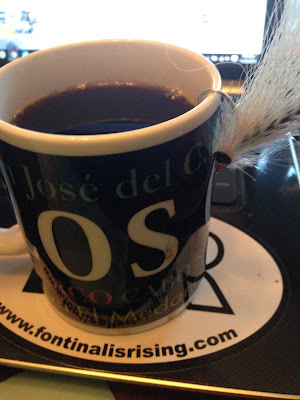 I see from the safe distance that is North Georgia, that Michigan and the upper Midwest have gotten their first snow storm. My social media is showing me that the streamer bite for browns is still good, and that guys are scoring on steelhead and even Atlantic salmon. If El Nino prevails then there should be some decent steelhead fishing all winter.
Between moving and other factors my fishing has been rather spotty. I spent at least a week sick, and last week my back went out and the recovery has been slow, though I'm back at 95% now.

We had a blast of rain come through last week here in Georgia so I got out Friday morning to streamer fish as the water was dropping. I had a couple of really stellar days a couple weeks back when the clouds and drizzle stuck around, but Friday even the stain in the water couldn't offset the bluebird skies. I missed a couple of teener fish and caught three smaller fish. I've been throwing Deceivers, conehead Madonnas, a zoo cougar etc. but by far my best producer this fall has been a muddler minnow. My biggest fish have come on it, though I've missed or lost a couple monster browns on a white deceiver. 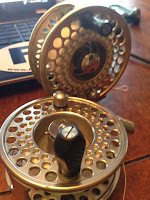 I bought a couple used Orvis reels off of Alex Cerveniak this summer, but never figured out how to switch the retrieve on them for this south paw, so I braved the Atlanta traffic and took then into the Orvis store in Buckhead. Aaron was extremely helpful, and even helped me out with directions to some less traveled fishing spots and fly patterns. This isn't some sort of sponsored plug; I just appreciate good service when I get it. I can't wait to get out and try some spots, and I really love the fact that it's possible to catch fish on a dry every month of the year here.

I have a couple of new posts in the pipeline, and should have a new one up on Gink and Gasoline soon. Dan Frasier has some good thoughts on the impact of social media on fly fishing on the GnG website, so be sure and check that out.

It's going to be a busy week and I have turkey recipes to look up. Happy Thanksgiving and have a great week. Let's get after it. 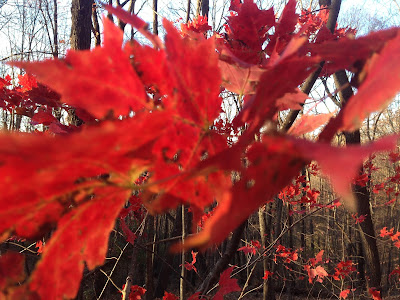 Posted by Fontinalis Rising at 6:28 AM 3 comments: 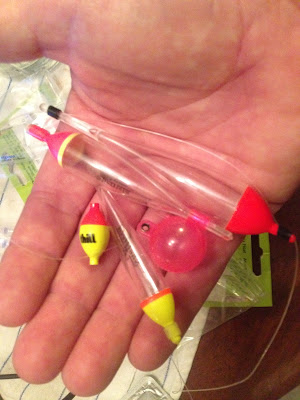 Here's another take on this on the S.C.O.F. blog. Check it out.
Posted by Fontinalis Rising at 3:53 PM 4 comments: 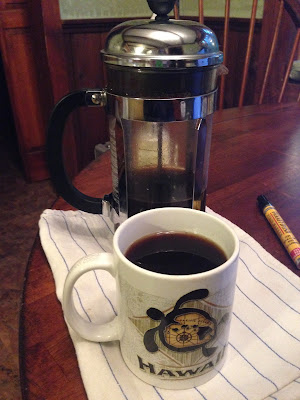 Yaaaaauuuuchhhppphhhhtttt!!~! Yawn, stretch, scratch, repeat- it's Monday, and it's been awhile, so let's have some coffee shall we?

This Monday finds me in north Georgia, staring out the windows as the rain pours down. It was indeed a rainy night in Georgia (cue the music). I've been kind of quiet about this, but Georgia is my new home- hey, love will make you do crazy things. I still have a place in Michigan, and I plan to get back there on a regular basis, but I see this as a way to get out and expand my horizons, fish some new water, even dabble in the salt a bit. I've already started.

It has been difficult to know what to do with this blog, as I have seen it as fundamentally linked to fishing in northern Michigan, but I've also shared my adventures with you in Canada, Colorado and beyond. It was never meant to be about one place, but about a love of water and fish. The great thing about fly fishing is that there are no limits- it can embrace any species in any waters, using dozens of methods and a variety of gear. You're only limited by your imagination. So I'll do what I can to get back on this horse, expand its horizons and take you along.


I do need to give a shout-out to Louis Cahill of Gink and Gasoline, who has welcomed me here like a brother, taken me out fishing a few times, and tried to download all of his knowledge of North Georgia trout fishing, the good, the bad, the ugly. Thankfully there's plenty of good, and I'm enjoying it immensely. Louis and I have embarked on a quest to dial in the urban carp fishing around here, including one decidedly unsuccessful outing (due to high winds), one of those trips that comforts you in the knowledge that even a guy like Louis has bad days occasionally.


To my brothers in the Mitten State- it will be your job to be the local guide now when I come to visit. Thanks for all the good times, and here's to many more. Come visit me when the snow is neck deep and we'll go catch trout on dries in January. I'm going to have a permanent X on my calendar in the middle of June, when the bugs are hatching, the trout are looking up, and the carp and smallmouth are on the flats.

As long as we're here I may as well share that I did get out last week and did some streamer fishing on a local stream Louis had shared with me. Every trout stream here is a beautiful mountain stream with all that that entails- waterfalls, plunge pools, rhododendron on the slopes. I chose to toss streamers due to the time of year, and I wasn't disappointed. For some reason it took the better part of the day for the fish to get interested, but once they did the action was pretty steady.


I had a lot of close calls, and a few small fish when I worked my way down to a local dude tossing worms at a palomino trout. He was friendly and garrulous, and no sooner had we parted ways and I found a particularly good looking run, with a seam of dark water on the far bank. On about my fourth cast my fly stopped and then the water exploded as a five pound rainbow took off upstream. After a brief but hard fought battle I slid him onto the sand, removed the hook and took a couple quick photos before sending on his way. 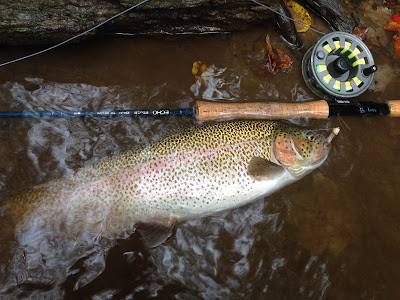 I could argue the merits of fishing in Michigan versus Georgia until we're all sick of it, but it's hard to argue with a fish like that. My coffee is finished, and it's time to find a job. Let's get after it.
Posted by Fontinalis Rising at 6:15 AM 17 comments: