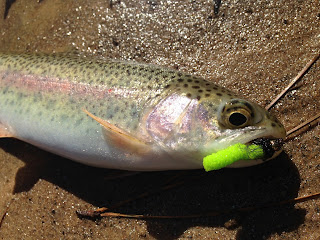 I don't normally do trip reports, but my plans for work Monday were buggered beyond repair and the weather was particularly fine, so why not go fish?

It was noon before I figured out I was being blown off for work and so I drove up to the Middle Fork Broad River to give it a second chance, seeing how it had so grievously disappointed me last winter. It's stocker heaven as told by the bait containers and beaten down banks, the wads of line and lures in the trees which I repeatedly caught, the deeply etched trails, and the broken spin casting rod stuck in the red clay. You can also tell by the numerous 8-12 inch stocked rainbows with the sketchy looking fins. I'm not giving up anyone's secret spot here; there's no giant browns lurking in the holes.

The decision had been made many weeks before that I would be trying new flies and techniques, namely the mop fly and the bobber. The mop fly is new to me. You tie it out of a tungsten bead, a piece cut off of a micro-fiber mop and a bit of dubbing to cover your wraps. The fly looks like a big fat grub, and you can well imagine that to a stocker a chartruese and pink grub is a meal too good to pass up. The bobber is just the icing on my cake- I don't have to tie on a good dry fly as an indicator, and every now and then a stocker hits the bobber for good measure. The bobber eliminates most of the guesswork surrounding the bite, freeing me up to further appreciate my surroundings.

I'm aware I've made this river sound like a hell hole, but the truth is the Middle Fork Broad River is actually quite lovely. It's true that where road touches river the mark of  the many is painfully obvious, but it is a mountain stream that tumbles over small ledge waterfalls and riffles, flowing past small granite cliffs beneath razor sharp ridges high enough that I don't wish to traverse them. 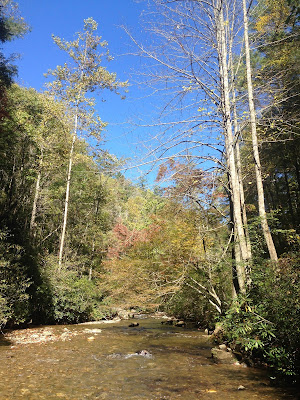 I started fishing at the meat hole, a deep green abyss next to the road in an otherwise shallow and frisky mountain stream. On my first cast a stocker rainbow grabbed my mop fly, thus eliminating any doubt as to its efficacy. For the next quarter mile I caught fish after fish. I managed to break off several of my flies, but no matter what color I chose- tan/black, pink/chartreuse, green/black etc., the fish continued to eat with gusto. I caught 8-10 fish out of a single deep run. 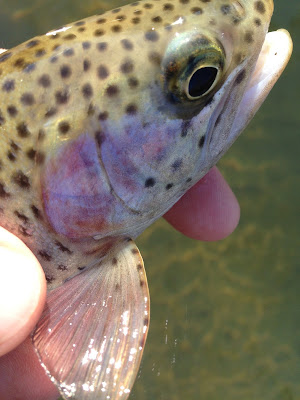 And so it went the rest of the afternoon. I cast this cumbersome setup, the bobber dipped and waggled, the rod bent, and the fisherman smiled. Stockers are easy to hate on paper, but when you look into those big stocker eyes, gaze at their leopard spotted pelt and pink rainbow stripe, you just want to take them home with you.

When I reached the bridge I was parked at, a vehicle crossed and parked on the other side. Doors opened and closed, but I heard nothing else. Two bends up the river I ran into a hunters blind so I turned around and  left the way I came. 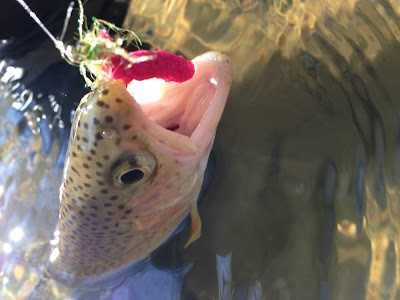 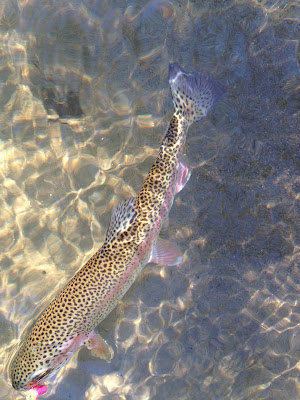 Posted by Fontinalis Rising at 7:52 AM