The Hex Files- The Book of Reister 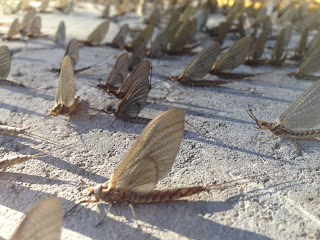 Reister mans the oars as darkness descends over the Au Sable river. He back-rows confidently, eases the boat back on the sand. We wait silently on a bend as the sun sets and the light bleeds from the sky; we watch the Isonychia legions dance and grow, before falling into formation, flying upstream on a mission of sex and death. Only small fish feed.

Then, at that moment just before the light fails completely, the first Hexagenia mayflies begin to flutter above. "Time to pull the anchor my friend" says Reister, and we drift downstream on our magic carpet ride, the music of water and insect wings in our ears, set to the gentle beat of creaking oar locks while mosquitoes sing harmony.

The anchor yet drips silver when the rush of a riffle is punctuated by the splash of a feeding fish. The anchor drops, I stand to cast, but the current, powerful, sweeps us onward, the chain dragging through the gravel as we pass. The fish continues feeding from the conveyor. We pull anchor and continue on.

Just downstream another fish is rising rhythmically, sloshing water all over the grass. This time the anchor holds. I cast, cast, cast again, but the fish, a big one, is hard up against the bank in six inches of water, a narrow band of calm against the grass with current ripping past. All presentations are met with the same indifference. The anchor comes up dripping and we follow the current, follow our ears in search of a better target.

We reach a broad quiet stretch, and Reister, master and commander, eases the anchor back to the river bottom.

I sit at the bow, blind, deaf and mute. Reister raises a hand and says "Hear that?"

I hear nothing, but the anchor comes up and Reister slips the oars, neatly crossing the current without making a sound or yielding downstream. Silently the anchor goes back in and we wait, ears straining for the telltale sounds.

"There he is" says Reister. I pretend to hear it and agree. Up the anchor comes and the boat drifts closer to the far bank, more silent than the last time. Once again the boat swings on the end of its rope and this time I hear it clearly, the sound of a large fish taking large flies off the surface. The anchor comes up one last time, the back of the boat is pointed at the bank and again the anchor slips silently to the bottom. When the rope swings taut the snout of a fish breaks the water ten feet straight out from me.

We watch it feed a few times but it is moving all over the place. It feeds next to the boat, gradually works its way upstream, so Reister draws his rod from the boat tube like Excalibur from stone. I sit back, grab a turkey leg, take in the show. Cast after cast he works the fish while I listen. As he works that fish I start to hear other noises. When I hear a rise just below the boat simultaneously with Reister's fish I realize we have a crowd.

Reister is in the stern casting, so I start working the fish next to and below the boat. It doesn't take long. A few casts in my fly disappears in a gulp and I set the hook. Up comes the fish, one jump, two jumps, three, a brief run downstream, a lot of headshaking and wringing of fins ("Why god, why!?!") before sliding into the net.

It's a twenty inch rainbow. We take his mugshot for future identification, let him go on self-recognizance, then issue a pardon in his absence and propose a toast. Up comes the anchor, and we slip downstream, ears straining into the night.


Posted by Fontinalis Rising at 4:19 PM