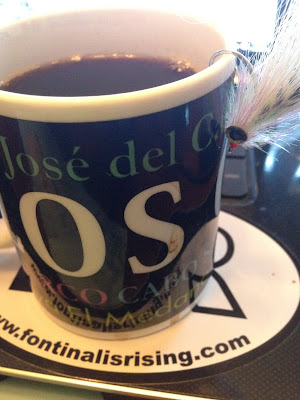 Aaaaauuuuuppppppffffffffftttttt!!! Yawn, stretch, scratch repeat. It's Monday, so let's have some coffee.

I haven't fished much the last couple weeks between work, weather, and lack of opportunity, though not for lack of desire. So last week I made up my mind I wanted to fish Saturday.

We made the drive north into the mountains to try and fish various tributaries of the Chattooga river. We made it to the first access I wanted to reach and poked around a bit. When nothing came out to play at the first bridge, we crossed the river and followed the trail upstream, stopping to fish at a rapid and waterfall. No such luck there, so we tried to push on around the falls and upstream. 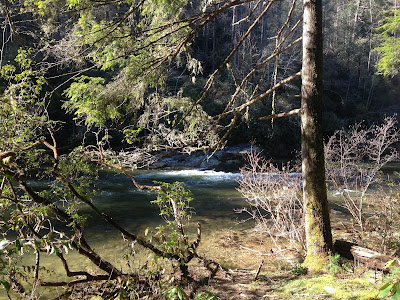 The water was still high from the previous day's rain, which hampered access somewhat. I've found too, that getting around these mountain streams can be difficult to hazardous. Anywhere there's a fall, it means the mountain generally pinches around the stream. If you can't climb straight up the fall, you have to climb the mountain.

So climb the mountain we did. At first it wasn't too bad, but soon the slopes began resembling cliffs, and the rain had left the ground and roots and rocks slick. A glimpse of a waterfall coming off the gorge wall and falling a few stories beckoned, but we soon reach a place where the ledge we were on was only as wide as your foot, and a mistake would have been unforgiving, so we turned back. We went to a smaller creek, but by then it was late in the day, and perhaps due to the recent high water, I didn't find any fish. Next time. It was still a pleasant outing marked by extreme beauty and nice weather.

Clean Water at risk in the Great Lakes

I have several posts ready to drop here on FR and I'm hoping to finish them and get them out soon. My attention has been somewhat taken by conservation matters. I'm researching a story for Gink and Gasoline about the expansion of a private fish farm upstream of the Holy Waters of the Au Sable River in Michigan. What I'm finding is disturbing.

They basically want to use clean public water, pollute it and discharge it untreated back into the trout stream. Profit from a public resource with little cost to themselves. This story alone would be disturbing enough, but according to their filings it's part of a major push to establish a multi-billion dollar aquaculture industry in the Great Lakes. The same forces have introduced legislation in Wisconsin to do similar- make reckless changes to trout streams without regard to the health of the watershed, then discharge pollution into the river from their "farms" with little to no waste water treatment required of them, and introduce this kind of reckless aquaculture on a wide scale throughout the region.

I'm still looking into all this, but better people than me are already on the case. In Michigan Anglers of the Au Sable, Michigan Trout Unlimited and the Sierra Club have filed suit. Republican law makers (and others) have introduced legislation to oppose unfettered expansion of fish farming in Michigan. Others are doing the same in Wisconsin. See the link here http://www.jsonline.com/news/statepolitics/measure-to-help-fish-farms-stirs-controversy-b99651997z1-365360301.html

Please- contact your local conservation organization, whether it's Trout Unlimited or another group and see how you can help. Contact your local state representative and let them know you oppose the industrialization of trout streams and clean water. Clean water and conservation progress of the last 60 or more years are under attack like never before. Let's not let all that has been accomplished be undone by greedy private interests. I'll have more specifics in my Gink and Gasoline article, but don't wait. Time is of the essence. I'll have links in the article, but you can go to the Anglers of the Au Sable website to donate to the legal battle if you are able.

I know. Just when you thought it was safe to go into the water again. But my coffee is gone and it's going to be a good week. Let's get after it.

Posted by Fontinalis Rising at 7:47 AM