A Search for Balance 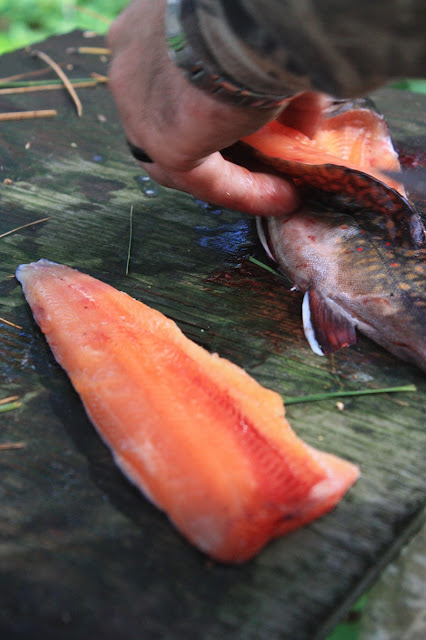 All of life is a search for balance, and they say you don't really figure life out until you're about 80 years old. Then you die of course. A fly fishing blog is hardly the place to find truth and Zen. Fly fishing of course, is a spiritual journey, even before you are aware of it. Fly fishing is by definition an expansion of awareness, mindfulness, a balm to the soul, a healing of the psyche. You only get good at fly fishing when you learn to use all of your senses, when you slow down, relax, become AWARE. When you finally let go of ego and self, stop listening to the internal voice and start listening to what the natural world is trying to tell you.

Last year I ate a brook trout. I caught it on a fly, cut it's throat, watched the life drain out, and then took it home, skinned it, fried it in butter and consumed the delicate orange flesh. It was delicious and good. It was communion. It was satisfaction, the completion of a task. It was finished business. It was the essence of a stream on a plate. To be trite, it was the circle of life.

I also ate a young steelhead last winter, as an act of rebellion. I caught it on a warmish day when the ice did not collect in my guides. It was a very fat fish, about twenty inches long, with a white belly, gleaming silver sides with just the hint of pink, and a blue gray back. I took it home and filleted it out, then cooked the fillets in olive oil. The flesh was a deep crimson in the pan, and absolutely delicious. It was a very satisfying meal.

We live in a world of polarization- politically, religiously, ideologically. It's ingrained in our culture- "Go Wildcats!" Be true to your school. My country, right or wrong becomes "my thinking, my way of life, right or wrong, but your thinking and way of life are definitely wrong." As individuals and families we gravitate toward moderation, but as societies we adhere to the worst forms of tribalism, wanton gluttony and avarice, and ultimately violence. This alone may explain fly fishing, the need for the individual to find balance in a world that demands zealotry.

For some reason abundance in the wild engenders bad behavior in humans, as if we as a species get filled with a primal lust unexplained by hunger or the desire for wealth. We lost our minds when we saw herds of bison stretching to the horizon, when passenger pigeons darkened the skies, when the cod on the Grand Banks swam so thick they slowed the progress of boats, and we systematically exploited them to the brink of extinction, or beyond.

There's an entertaining passage in the Bible in which the Israelites, recently freed from Egypt and wandering in a barren desert, began to complain that there was no meat. Some suggested that returning to slavery in Egypt would be preferable- at least they had food. According to the passage, God sent quails into the camp and the people went gathering them by the bushel basket. God killed a certain number of them for being greedy rather than taking what they needed to sustain themselves.

Regardless of your religious bent or lack thereof the lesson is instructive. At the very least the author had a keen insight into human behavior, and our baser tendencies when faced with natural abundance.

I'm not against catch and release, having practiced it for the most part for a number of years now. I'm not against keeping fish for a meal, having partaken on a number of occasions in the same period. Food is what originally brought us to the streams, and it is only in the last few decades that the notion of recreation has even entered the equation. Historically recreation was always a part of angling, but with the goal of a meal at the end of it, and not as the ultimate desired end.

Catch and release will increasingly be a tool of conservation, but it is just a tool and a rather blunt instrument at that. It is not a guarantee. Fish still die from being caught. An angler who catches and keeps two trout may do far less damage than an angler who releases thirty trout and kills five through bad handling, or fishing when the water is too warm.

This for me has been my journey thus far. A search for balance, some peace of mind, connection to the natural world, and every now and then, some fillets on my plate that I caught and cooked myself.
Posted by Fontinalis Rising at 6:06 AM