I'm sitting around on a sunny Saturday morning with a bad chest cold, perusing social media for some good reads. I found this thanks to Cameron Mortenson over at The Fiberglass Manifesto and it got me thinking- what are my fantasy fish?

I have a lot of dream destinations I want to fish for various familiar species- northern Ontario/Quebec/Labrador for big brook trout, or the Innoko river in Alaska for pike, but those are familiar species I catch on a regular basis.

But that article in Scale magazine got me thinking- what species make the fantasy list? Species so exotic that they set the imagination on fire. Something you can't catch in your backyard. Fish that live in an exotic setting, fight hard and take you to a whole new level.

I may as well start with the fish in the article. It is claimed, as with so many fish, that mahseer fight pound for pound harder than any other freshwater fish. I'd like to test that claim. But when you couple them with such an exotic location- a jungle river, wild elephants, Asian tapir, pythons and cobras AND a mayfly hatch- now that is something you have to experience at least once. 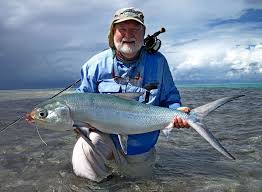 Ah, the Seychelles, Maldives, and all points thereabouts. To fly to a location in the Indian Ocean that takes two days to get to, then to chase a plethora of flats species on those distant shores- bonefish, permit, Grand Trevally, and the elusive and hard to hook milkfish, which subsequently proceeds to give your drag a much needed cleaning. I could really go for that.

I have a Heart of Darkness fascination with the Amazon jungle and it's fishes. Perhaps it's due to my late father's travels down Ecuadorian rivers on native rafts, in search of such fish. He was after catfish; I want to chase Peacocks. In a lot of ways the Amazon is the new Dark Continent, with hidden tribes, big predators, big hard-fighting fish, and lots of mystery. I want to go.

And so to the real Heart of Darkness- Africa itself. Much of it is still little explored by the outside world. I recently read Peter Capstick, in which his camp cook's son was killed and eaten by a leopard, and then they had to hunt the cat over the boys dead body stashed in a tree. And it is in this landscape in which I want to fish for a creature with huge fangs, one that has been seen snatching birds out of the air. It lives in malarial jungles, in areas prone to Ebola outbreaks, and the much more deadly civil and national wars. Throw in an active volcano or two and you have the perfect Indiana Jones fly fishing adventure, which I am jonesing for.

There is no limit to the dreams of a fly fisher. Social media can make it all seem so immediate and real. Most of us will take our adventures on brook trout streams, with social media and the internet to fill in the gaps. But once, just once, you need to pursue the monsters that dwell in your dreams. I hope we all get the chance.

All images were stolen fair and square off the internet.

Posted by Fontinalis Rising at 12:04 PM