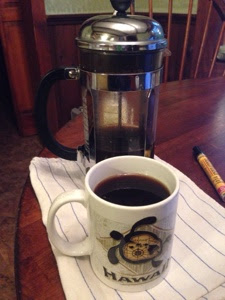 Yyyyyerrrrggghttppppphhhhttt!!!! Yawn, stretch, scratch, repeat- it's Monday, and I have some things to share, so let's have some coffee shall we?

As the title implies, I have had some conservation issues on my mind of late, and I have a post coming out tomorrow on the issue of public lands, so please tune in to that if you can. I have also coordinated with several other blogs to do the same thing. Public access to public land and waters is important to all outdoor enthusiasts, to a major share of the American public as a matter of fact, but right now those lands and some fundamental American ideals are under threat. Tune in tomorrow to learn more. If I can I'll share a couple posts this week including info on what we all can do to protect our heritage.

It seems like I'm slowly but surely cracking the fishing code here in North Georgia. For most of the summer it has been far too hot to enjoy a lot of fishing, and we've experienced some fish kills as far as trout are concerned. A lot of the streams are far too warm to consider trout fishing, so I've largely left them alone. I had a day off last week, however, and went up and fished the Chattooga river for Bartram's and redeye bass.

The Chattooga River is an un-dammed system that delineates the boundary between Georgia and South Carolina. A week ago we hiked into the Ellicott Wilderness to see Ellicott Rock which marks the meeting point of those two states plus North Carolina. I saw a lot of trout up there, but didn't bring a rod due to the length and difficulty of the trail. So on Thursday I drove up and stopped into the Chattooga River Fly Shop in what is a rather remote corner of South Carolina, bought some flies and got some advice. Then I drove into what is more or less a canyon to fish. 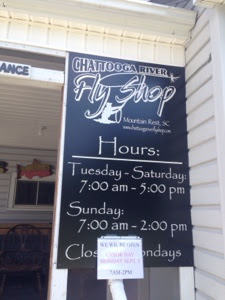 The fish weren't as aggressive as I would have expected but I still managed to land a couple dozen bass plus some redbreast sunfish. The water is crystal clear, and you're fishing rapids (they call them shoals here) and in and around waterfalls. The water, flies and conditions were a lot like fishing late summer brook trout, and the bass were similarly sized. I hooked up on a couple better fish that came unpinned, and even had a couple catfish have a look at my flies. It may not be trout fishing, but I'll take chasing native fish in pristine settings over stocked rainbows any day. The markings on these fish are absolutely beautiful and it is really cool adding new species to the personal list. 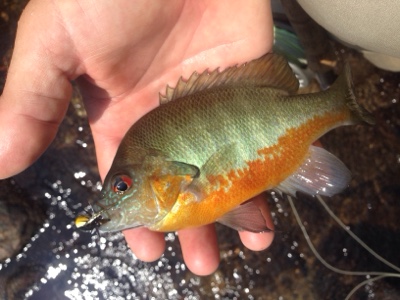 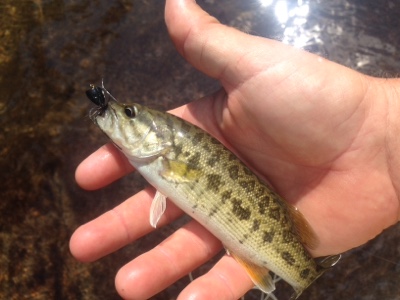 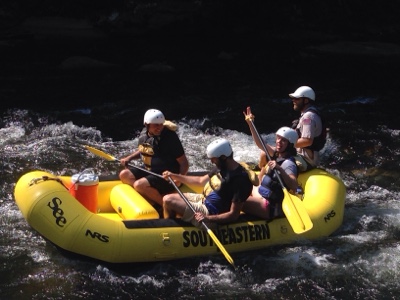 Then Sunday we floated the Chestatee River. We bought some twin hulled kayaks earlier this year that you can stand up and cast from. I spent a very pleasant long afternoon catching largemouth bass, sunfish and bluegills, and saw quite a few hybrid bass and stripers in the river. There were a ton of baitfish in the river and I'm sure the hybrids were after them, and the stripers are a summer run that should be ending any day now. Toward the end of the day I had a very large bass eat right in front of me and take me on a wild ride, but my tippet was a bit light and probably worn from all 'gills I had been catching. On his second run he broke me off. He was pushing 5 pounds. 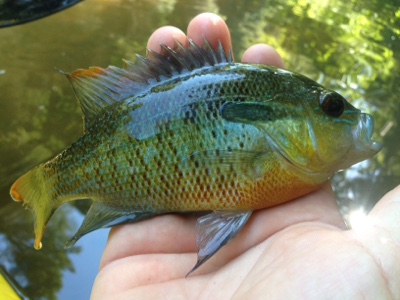 Well, my coffee is gone and it's time to go to work. Let's get after it.
Posted by Fontinalis Rising at 5:13 AM