In Defense of Chuck n Duck 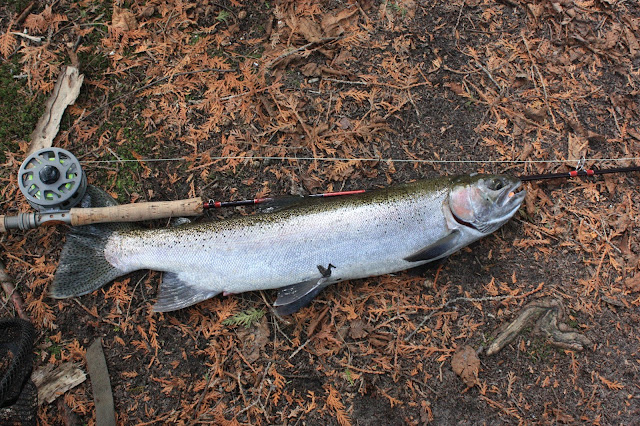 Fly fishing is the rod, the reel, and the line. If you don’t have those three, you’re doing something else. It may be fishing, but it’s not fly fishing*.- Brandon Robinson

“Are you bringing your chuck n duck rod? Bring it. I’m swinging this entire trip, but we need pictures of fish”- Alex Cerveniak

By the definition quoted above, chuck and duck is not fly fishing. Chuck and duck, or bottom bouncing, uses a running line to cut through the water and get down to the bottom quickly. The set up is typically a running line with a sliding weight, a swivel to stop the weight, and then a length of leader with the fly attached. There are a number of variations to this including the use of slinkies, or other means to try to make the weight snag free. The whole goal is to get your fly down to the bottom as quickly as possible and keep it there, then bounce it along the bottom so that your fly drifts with the current. It can be a very effective method of fishing for steelhead, especially when they are not active or suspended in the current. Because the running line has no weight to cast a fly, the whole contraption has to be pitched unceremoniously into the river, and thus the name chuck n duck.

When I was first interested in fly fishing for steelhead and salmon, a friend of mine showed me his chuck n duck rig. It was back when Amnesia running line was all the rage. I didn’t question it back then, and there was quite a period of time when if you were talking about fly fishing for steelhead in Michigan, you were talking about chuck n duck. Then indicator fishing caught on and that was all the rage. Now Spey and Skagit style casting have taken the steelhead world by storm. All the cool kids are doing it. It has become de rigeur to label chuck n duck as ugly or even unethical. Swinging Spey flies on two-handed rigs is the only way to fish.

But that is not true, and it’s not true for everyone. The first thing to note is that all three techniques work and shine in their own rights. They all work in different ways, and there are times when each out-performs the others.

Take for instance a late winter/ early spring warm up before the main run. Melting snow and a shot of rain have brought in some fish, and they are on the move. This is a great time to fish indicators. The fish are suspended or at least will come up to take a fly drifting under a bobber. Great.

If the water is high and turbid however, the fish will be hugging bottom, and the ripping current will make indicator fishing very difficult. This is when chuck n duck shines. It gets your flies down fast into the fish zone and keeps it there throughout the drift. If you aren’t ticking the bottom, just add weight.

The water you fish makes a huge difference as well. Spey and Skagit style casting are made for fishing large wide rivers. Where indicator and chuck n duck fishing allows you tear apart individual pieces of holding water, Spey casting allows you to fish the whole river, searching for active fish willing to hit a streamer. But the rivers I fish in northern Michigan are quite small and shallow. Belting a hundred foot Skagit cast will land you sixty feet into the brush. You don’t so much swing as dangle the fly and drift it back and forth. I know guys who do this, but it’s a far cry from the beautiful, elegant long distance casting Spey casting is designed for. The technique that shines in my fast, shallow small streams is chuck n duck.

Chuck n duck is a technique, no more and no less than other forms of fishing. If you find it aesthetically distasteful, then that’s your prerogative. When I was introduced to fly fishing for steelhead in Michigan it’s the technique I was taught. Nobody told me it was bad or undesirable. It was just how you did it. Then indicator fishing swept through the state and is still widely practiced. I would say it is a slightly elevated way to fish, as it employs an actual fly line (see quote above; line manufacturers produce fly lines for indicator fishing), and there is a bit more technique to the rigging, casting and mending to get a clean drift.

The latest and greatest technique that everyone has been piling onto in the steelhead world for some time is Spey/Skagit style fishing, and that’s great, but it is a whole system and world unto itself. It employs completely different rods, lines, reels and flies. If you’re going to fish this way it will require laying out yet again a small pile of Benjamins, buying or learning to tie new flies, and learning a completely different set of casting skills that have their own learning curve. It requires fishing different water, and also has its own river etiquette. If you’re fishing crowded water that attracts a variety of anglers you may be SOL. And if, like me, all the water close to hand is small stream fishing that wouldn’t allow you to deploy more than your Skagit head out of the rod, it’s an awful lot of time and money spent on something you’ll rarely use.

The biggest accusation I hear against chuck n duck is when I hear it called “flossing”. I’ve heard guides assert that fish aren’t biting a chuck n duck rig but are merely getting the leader caught in their mouths and incidentally hooked. In other words, it is tantamount to snagging. Unfortunately I have witnessed guys fishing to spawning steelhead or salmon on gravel and using it to snag them. If you are this kind of angler there is nothing I can do to help you. You’re not a fisherman anyway, you’re a snagger. There are plenty of other techniques out there that can likewise be used to fish unethically or illegally.

Personally, I fish dark water where I typically can’t see the fish. All of my fish are typically hooked in the corner of the mouth in the same manner as any other method. I’m chucking eggs and nymphs and small bugger variations, the same flies they eat employing the other techniques. The attempts by some to smear the technique as unethical because they see individuals using it to snag fall on my deaf ears. Those same individuals would still try to snag fish off gravel using any means they could. I don’t do it and neither should you.

Why employ the technique? Because it works. There are times and places to go to the river, Spey gear in hand, and not catch fish, and there are times to take your chuck rig and catch some. There are times when you can fish the same terminal rigging with a fly line, and the fact that it keeps your fly a few inches off the bottom will keep you from catching fish. Switch to a running line and it will sink to the bottom and you’ll have a good day.

They say a specialist is someone who knows more and more about less and less until he knows everything about nothing. The same could be true of fly fishing, in which your pursuit becomes so esoteric that you're no longer fishing.

There is of course the issue of aesthetics, which is a whole discussion in itself. After all, the practice of fly fishing is a way of limiting yourself in exchange for a more aesthetically pleasing experience. But it is possible to extend that to the point where you’re no longer fishing. Spey and Skagit techniques are lauded as the most elegant, difficult, satisfying and “pure” method of fishing for steelhead. It is also severely limiting. When you’re surrounded by small waters not conducive to such, your choice can be to make an investment in time and travel any time you want to fish, or stay home and stare out the windows. I’d rather take my chuck rig and go fishing. Sometimes you want to catch fish. Sometimes you want to eat fish, and in the Great Lakes, where steelhead are an introduced species and in no danger (if they are the DNR will stock more), that’s perfectly fine.

The point to all this is to say- don’t hate chuck n duck. It’s just another technique. If you choose not to practice it that’s your prerogative. If you see unethical behavior on the river, call those people out or call law enforcement. If it’s a cold winter day and you just want to beat the drear and go catch a fish, grab your chuck rig and go. Don’t let anyone stop you.

For rigging notes and some other thoughts on the subject check out this post by Third Coast Fly.

Author's note- I lost a hard drive and all these photos are quite old. At least two of these fish went home with me, so keep em' wet wasn't part of the equation.

*Another note: I happen to agree with Brandon Robinson's observation above, at least in the technical sense.

Posted by Fontinalis Rising at 4:30 AM