My First Bonefish- Some Premature Observations 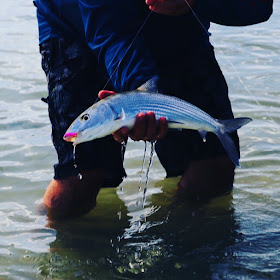 Authors note: I wrote this a few weeks after returning from a cruise to Mexico in November, 2017. I didn't post it in a timely fashion, but still wanted to share it, so here it is.

Authors note 2: It seems I broke the photo card from this trip. Didn't know it was possible. Two months after this trip I went on a week-long trip with Louis Cahill in which the bonefish fully lived up to the hype.

The first flat was empty, and seemed so devoid of life that it caused me to question our guide. Alberto identifies as Mayan. He has been guiding since 1986, so I keep my own counsel and remind myself not to be impatient. This is a half day trip, my first for bonefish, so it is hard not to count the minutes. Alberto motors through the cut that separates Belize and Mexico, into the shallow expanse  that is Chetumal Bay. He kills the motor at the first mangrove shoreline, and immediately we spot forked tails dancing above the surface.

I have been on a cruise ship for five days now, and as enjoyable and relaxing as it has been, I really needed this adventure. I ran the track on the upper deck the first morning (four laps= 1 mile) and we snorkeled in Cozumel and then the barrier reef at Belize on consecutive days, so I've gotten some exercise. But being here, on the front of a panga, scanning the shallow water for shadows and tails is where I need to be.

Our final stop of this cruise is in Mahahual, Quintana Roo, Mexico. The cruise lines have built a port there in an attempt to wring yet more money out of its credulous passengers. You hope that some of the locals are benefiting from all this, but once you leave the tchochke farm that is the cruise port, you find yourself surrounded by a grittier reality that makes you think all the profits from the tiki bars and shops selling rubber dog shit are just a front for said cruise lines. But I'm being cynical.

It's an hour taxi ride, mostly through mangrove swamp and jungle. Our driver has to swerve to avoid the chachalacas strutting in the road. We also see a fox and a wild pig. When you run out of good road you have reached Xcalak, a tiny village on the Mexican frontier with Belize. Here there be bonefish, and Costa de Cocos, the beach resort we have booked our fishing through.

I brought a rod with me on the ship, but then I read that they provide gear. I didn't trust my reel, and so my gear stayed on the ship. There are two TFO rods on the panga, and luckily one is rigged for a lefty. Some notes about the rod- it's heavier than my TiCRX, and the plastic is still on the cork. I'll get back to that later.

We beach the boat next to mangroves, but those first tails disappear. I make the mistake of casting to swirls that turn out to be needlefish, and learn to wait on Alberto. We cross a small creek dumping cold water into the flat, and I wait for Alberto to move the boat. I can see tails dancing further and further down the shore. But as we resume our slow progress up the shore chasing tails, small groups of grey shadows dance over the sand in our direction, and Alberto says what I want to hear, "one o'clock, fifty feet. Cast!".

And I blow the first two shots. Too short. Too close. But the third time is the charm, despite my conking the lead two fish on the head and nearly blowing the school out again. Three twitches of the fly and a bonefish turns sideways. I soft-pedal the hook-set, and I'm attached to a bonefish in spite of myself. It cuts a zippy half-circle before heading straight away from me, but it stops its run before it gets to my backing. He quickly comes to hand, a beautiful silvery fish. I would say bonefish are long on speed and short on endurance. And there it is- my first bonefish. It ate a Crazy Charlie I tied myself before the trip. Tip: don't come here without all the flies you'll need.

After that I blow a perfect shot at about forty fish headed our way because I don't see the lead fish over a dark patch of bottom. Right after that a small pod turns back. It's a forty foot cast, and two strips later I'm hooked up. Another bonefish, another merry fight that ends quickly.

When we reach the end of the mangrove point we are following we turn back. The tide had turned almost from the moment we first stopped the boat, and the fish seem to be slipping into deeper water, no more tails dancing above sand. They are still within casting distance, but we have to look harder for silver flashes over the darker grass.

The next fish I am proud of, because I saw it before Alberto and surprised him with the cast.

"No!" he said, then "yes, yes, yes" and "three feesh!" right as I hook up. I watched those three fish peel out of the school and up over the sand. This one almost made it to the backing but stopped short. We pause to land and release the fish, and savor such a beautiful moment. We are barefoot, standing calf deep on soft white sand. It is about 78 degrees, with a steady, pleasant breeze. There is no one else around, and all we hear is the lap of waves and the occasional splash of fish. It is perhaps the most pleasant moment of the entire year.
Back on the panga we eat the sandwiches from the cooler and sip on water. Alberto wants to pole into the wind. At one point I see two tails and Alberto shouts "permit!" but we are on top of them and they are gone before I can cast. A few casts later, a bonefish takes and comes off before I realize it has eaten.

After the sandwich I reapplied sunscreen, and now, with greasy hands, the plastic on that rod cork has become a liability. Alberto keeps shouting "two o'clock, seexty feet!", but my hand is slipping so bad on that damn plastic that I cant get any juice into my cast. I don't know why I didn't just cut the plastic off. Who leaves that on anyway? But it is getting late and with just minutes left before we need to make the run back to the resort, our taxi, and the ship, Alberto has a change of plans. He wants Marsha to catch a fish, and so we go to a channel and troll Clouser minnows for some smash-n-grab jacks.

This all feels very familiar, as if I have been here before. If you have ever stalked flats in the Great Lakes for carp, then you know this game. Perhaps the Golden Bone moniker is not so inapt. The sand, the waves and wind, spooky fish over shallow water, the need to accurately present small flies often at great distances- no matter where you are doing this it is all the same.

The bonefish didn't quite live up to the hype that day- they were fast and fought hard, but not a single one touched my backing. Perhaps it was the cool weather, or maybe the small sample size. My first two years of fishing carp, not a single one touched the backing. In the several years after that it seemed like every fish went so far into the backing as to make me seriously sweat my knots.

I'm not complaining- the bonefish fought hard, and are one of the most elusive fish for the fly angler. If all you have ever caught are trout, you will find them extremely challenging. Being from the Great Lakes region, I have caught a lot of big, fast fish, including salmon and carp to thirty pounds, and double digit steelhead. All of them run fast and make you chase them. If you catch enough of them you learn how to fight big fish, how to set your drag, when to let a fish run and when to put the cork to them.

What I'm slowly getting at here, is if you have access to carp flats such as they have in the Great Lakes, don't ever think it's a second rate training ground for the salt. It's not. The differences are cosmetic- fresh versus salt, which bushes happen to be lining the shore, the bird species flying overhead. The wind, the water,the casting, the behavior of the fish, the speed and intensity of the fight are the same. The major difference is that it is more difficult to get carp to eat than bonefish.