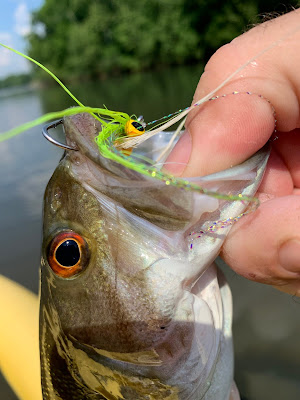 I am a devotee of native species. In Michigan I'll take native brook trout over imported steelhead. The native smallmouth and largemouth bass are more captivating for that matter. I love steelhead, but their presence in the Great Lakes feels artificial and managed. I feel like I'm buying a fake Gucci bag on Canal Street. Steelhead Alley feels like you're surrounded by guys trying to sell you $20 Rolexes. Don't get me wrong, I love fishing for steelhead. Back in the day I also enjoyed haggling over fake Rolexes in Manhattan.

The basses are most fascinating. There are local native basses here not heard of much outside of the region. Up north it's simple. Not simple, but of the larger basses there are largemouth and smallmouth bass. There are also rock bass, warmouth, and the sunfishes (also not as diverse as the south).

In the South you have sunfishes not found up north, but its the variety of bass that stand out. Largemouth and smallmouth are here in various places and numbers, but then there are all the local, more obscure species that are basically localized to specific river drainages and sub-regions of the south, and so you have shoal bass, redeye bass, Chattahoochee bass, Choctaw bass, spotted bass, Guadalupe bass (proud Texan), Suwannee bass, and Bartram's bass. Some are closely related to largemouth, some to smallmouth. They can hybridize, and I think some can hybridize with both as well as with each other. This is problematic, because the bucket brigades have been active here, moving these species around, and they have changed entire regimes in various watersheds. Where spotted bass have been introduced they tend to take over and either out-compete, or hybridize out the local fish. (There's a problem with locals moving flathead catfish around too, with bad results for fish species not adapted to these aggressive predators.)

To my knowledge, so far out of the local species I have caught redeye bass, shoal bass, Bartram's bass,  and spotted bass. Some of the identifications have come from locals commenting on my social media pics. The Bartram's bass is native only to the Broad River system, and maybe one or two other streams in South Carolina. I think Cameron Mortenson caught some on a guided trip there. From my reading, the Bartram's, which most resembles a smallmouth to my eye, is believed to be a unique species, but it has yet to be properly described scientifically.

These species of bass and some sunfishes fill the ecological niches that trout fill in colder streams. If you go to the Chattooga River in midsummer you can fish crystal clear riffles with small poppers and terrestrials, and catch redeye and shoal bass all day long. It is very reminiscent of fishing brook trout on hoppers up north, from the clarity of the water to the behavior of the fish, and the flies you use. It is an absolute blast, but for me the satisfaction comes in catching wild, native fish not found outside the region. It's the difference between seeing a lion pacing in a zoo, and seeing a lion on the African savanna lying under an acacia tree, supine and panting, with blood drying on its snout, it's yellow eyes sizing you up through the shimmer of the heat.

Fishing the Chattooga for bass is perhaps my favorite. It's a big system so I'm not giving up a secret spot here. It's the kind of place you can go and catch bass all day on topwater flies, stalking them like brook trout, catching fish until you're tired of it, or until the sun and heat beat you down into surrender. Most of the fish will be brook trout sized, but they can run three or four pounds. It's great fun on four weight glass.

I certainly still enjoy chasing trout in the mountains, especially the native brook trout, but the bass epitomize fishing in the South. I thought bass fishing here to be fishing warm, green, weedy ponds and lakes, or zipping around massive reservoirs in a metallic flake bass boat. Instead it is far more varied, interesting, and accessible than I could have imagined.

Posted by Fontinalis Rising at 3:05 PM