All the Gold in the World 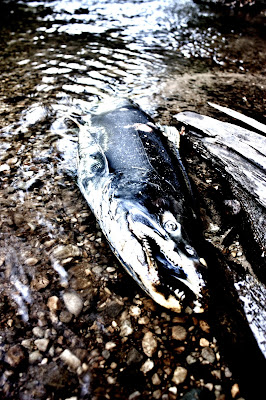 "For what shall it profit a man, if he shall gain the whole world, and lose his own soul?" Mark 8:36


It is much to my chagrin to see that the Pebble Mine is back from the dead. The Trump administration seems bent on fast-tracking the permitting process. After all the public input, the social media campaigns, and the efforts of the prior administration to put an end to it, the specter of a massive gold and copper mine in the headwaters of the greatest salmon fishery on earth again rears its ugly head.

Regardless of your political bent I think it's safe to say that the Pebble Mine won't benefit you. That gold and copper won't end up in your vault. It will provide a few jobs for a few decades, but nothing in comparison to the vast profits it will provide for its owners and investors. Meanwhile the $1.5 billion salmon fishery benefits commercial and recreational fishing industries, natives and residents on an annual, sustainable basis. Without the Pebble Mine it can continue to provide food and jobs and a way of life to people in perpetuity and long after Pebble has shuttered its doors and left a lake of waste waiting for the chance to escape and wreak havoc.

The mine will also provide decades, if not centuries, of risk to the Bristol Bay region. Acid mine waste is not pretty, and its devastation on the region would be terrible, and incredibly difficult or impossible to clean up and restore. They plan to contain the acid mine runoff in huge reservoirs in a seismically active region. Sure, they say they have it all engineered, but mining has a terrible track record of accidents and low compliance with regulation, and once you let that genie out of the bottle it's awfully hard to stuff it back in. Those dams only have to fail once. Pebble Mine is not progress. It is not even civilization. It is just ugly destruction in one of the most beautiful places on earth to enrich a greedy few.

But there's an even better reason to stop the Pebble Mine. The world is not vast anymore. Its abundance is not boundless. Its wonders are tarnished. Everywhere the natural world is hemmed in by agriculture, fences, cattle, dams, roads, development, pollution, garbage, defacement, climate change, and a myriad other cuts inflicted by man. The few natural spectacles left on earth only exist because they have been preserved by us, as if stuck in amber and displayed on a shelf. There are no unmanaged wild ecosystems that exist on their own apart from man. All of the ocean is over-fished, except for a few carefully managed systems like Bristol Bay. The time for trade-offs is over- there is no wildness left to barter over, an oil well for a coral reef here, this salmon run for that mine there, these orangutans for another palm oil plantation. We are down to the last examples of everything- the last rhino, the last intact salmon run, the last migrating antelope herds in Asia, the last intact rain forest. These are the last conservation hills left to die on, there are no others. When those are wiped out there is nothing, and nothing will bring them back.

Recent headlines announced that now over a million species are in peril of extinction in the next few decades from human activity. Ninety-seven percent of animal biomass on land consists of humans and their livestock. Are we shooting for 100%?

In the past we made those choices. We dammed the Columbia (and every other western US river worth damming) because there were salmon in British Columbia and Alaska. Salmon runs on the West Coast are just a memory, a dim shadow of their former selves. Now salmon and steelhead in British Columbia are under increasing pressure. Chinook salmon in the Yukon system are in trouble and no one knows why.

There are a scant handful of natural spectacles left on earth- parts of the Amazon rainforest, which must remain vast to be a spectacle, and the Brazilians and others are steadily chipping away at it. The animal spectacles of Africa- the charismatic megafauna are there but dwindling; the great migrations of wildebeest and plains game for now seem to be intact. The Great Barrier Reef is there but suffering greatly due to bleaching events caused by high temperatures. There are still some large caribou herds in the north, but the vast Labrador and Quebec herds have crashed due to natural cycles. Yellowstone is wonderful, but is a highly managed system hemmed in on all sides by agriculture, and a local populace uneasy with bears and wolves in their backyards.

So Bristol Bay and its salmon runs is one of the last natural spectacles left on earth. Its fisheries are heavily managed to maintain that abundance, but it's one of the last places you can go and witness an entire ecosystem, complete with mass migrations, and dependent megafauna like bears, seals, salmon sharks and orcas, due to the fact that it is not under threat from development like the Pebble Mine. We shot all the passenger pigeons; we killed the bison and turned their prairie into cornfields, or fenced it off for cattle. We dammed the Columbia and Snake rivers and throttled their salmon and steelhead runs for cheap energy and water for agriculture. Florida fisheries are being choked and whittled away for Big Sugar. We don't need to do the same to Bristol Bay. We are in danger of having all the gold in the world, and nothing to spend it on.
Posted by Fontinalis Rising at 1:27 PM 11 comments: